In an extraordinary moment in the house, Winston Peters has named the person he says leaked his superannuation details.

Morton, on twitter, says “the claims made by Winston Peters about me today are categorically not true.”

Peters claims the breach of his privacy was an “ACT-inspired hit job”.

Rachel Morton and ACT leader David Seymour have a close relationship. This could be the basis of Winston Peters’ claim that the leaking was orchestrated by the ACT and National parties.

Peters claimed Morton heard about his details when she was present in a ministerial office when former Minister Anne Tolley told Paula Bennett.

He says “This is what dirty politics looks like.” 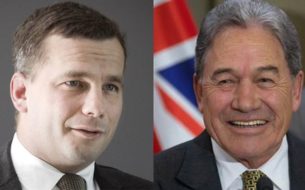 Peter’s belief that ACT are behind the leak probably explains the recent twitter exchange suggesting fist fighting between Peters and  David ‘the Fighting Hologram’ Seymour.

Peters’ anger may have been stoked by being ordered by the High Court to pay over $300,000 in costs after his court action over the superannuation details leak failed.

This has some clear implications for the election outcome.

If NZ First does make it back and Collins calls, I can’t see Winston Peters picking up the phone now, unless it’s to laugh, then hang up.