Just reading an article about what has happened in the volcanic eruption in Indonesia that caused the Dec 22nd tsunami that killed 400+ people and displacement of more than 40,000. From the BBC(my italics):-

Researchers have examined satellite images of Anak Krakatau to calculate the amount of rock and ash that sheared off into the sea.

They say the volcano has lost more than two-thirds of its height and volume during the past week.

Much of this missing mass could have slid into the sea in one movement.

It would certainly explain the displacement of water and the generation of waves up to 5m high that then inundated the nearby coastlines of Java and Sumatra.

I’m now way less surprised at the size of that tsunami. That is a colossal amount of material.

The current loss estimate is that 150-170 million cubic metres of material has just gone, including all of the dome. To give you an idea, there is one man made structure in the world that has a similar volume at 153 million cubic metres. That is (apparently) a earth core irrigation and power project in India called the Nagarjuna sagar project. Which I’d never heard off before looking up large man-made solid volume objects.

You can see the missing mountain in the satellite radar mapping:- 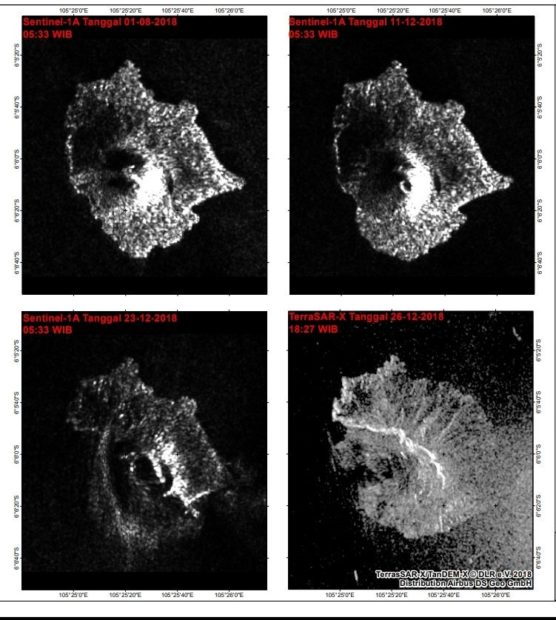 Anak Krakatau is a very young volcano within and around the old area of Anak Krakatoa which partially disintegrated in a major eruption in 1883 and caused a global average drop in temperature of about 1.2 C in the following year. Anak Krakatau is driven from the same plume of hot magma that formed the Krakatoa cone, but only broke above the water surface in 1930 and has been growing continuously since.

Because of the depth and enclosed nature of the surrounding waters, largish tsunamis are very likely from such fast growing volcanoes.

But I wouldn’t get too complacent in NZ. The large hole that is Lake Taupo is one of the world’s most dangerous volcanoes. The Oruanui eruption around 26,200 years ago is the largest known eruption in the last 70,000 years. The more recent Hatepe eruption about 1800 years ago ejected 30 km3 , about 150 times the current Anak Krakatau eruption, in minutes. It was the most violent eruption world wide in the last 5,000 years.

On that cheery note, I leave you to the New Years celebrations. I’m having mine in the kiwi city that contains at least the 53 recent basaltic volcanoes of (currently) dormant Auckland volcanic field. To someone trained in earth sciences, this is one of the safest places in New Zealand.