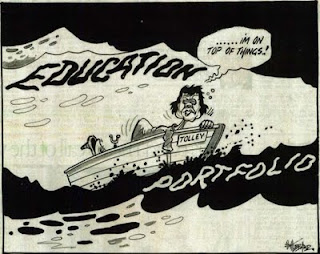 I have already expressed my concern that this government’s focus on numeracy and literacy, above all else, will have negative consequences on our children’s learning. The Ministry have just revealed that around 20% of schools have refused to set targets against the Standards and therefore rejecting a legislated requirement. These school communities (boards and staff) have felt so strongly about the negative aspects of the standards that they have broken the law to protect the children in their care. Considering that the Minister of Education has threatened to withhold resources or replace boards with statutory managers, their stands haven’t been taken lightly. One can only imagine how many schools have difficulty with the Standards but aren’t prepared to break the law. A number of surveys have indicated at least 75% of principals and schools have major concerns.

It will be difficult for the Minister to continue to claim that this is just political action initiated by education unions when whole school communities are taking action and the New Zealand Education Institute has mainly focussed on finding professional solutions. The Institute even attempted to engage with the Minister’s NS Sector Advisory Group only to find that there was no ability to address the flaws in the standards, its sole function was to facilitate implementation.

With such overwhelming opposition the Minister needs to start engaging with the profession and actually start responding to concerns in a professional way. The cracks are now too wide to cover up and reading the odd supporting letter in Parliament is not going hide the reality.

* And no, it is not the sprout