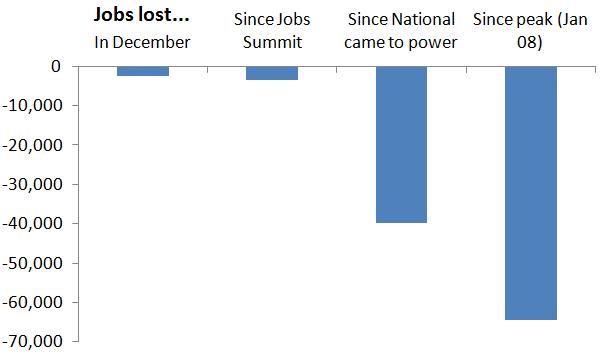 The real story of the ports dispute

Maybe it’s the influence of Bill ‘Guess’ English but National has this strange habit of only doing half the sum. Paula Bennett counts people going off the benefit, but not people going on. John Key looks at normal job creation but ignores normal job destruction. Now, he’s claiming that a mother with a 1-year old is better off working, but he’s not counting the costs of working.

There are quarter of a million jobless people. In a typical quarter, about 250,000 people start new jobs. Does that mean we can eliminate joblessness in a quarter? Of course fucken not, but that’s what National is telling you when they rabbit on about ‘10,000 jobs on Trademe’. To get joblessness and benefit numbers down you need a net increase in jobs,not just churn.

Why the Right wants to deny that unions increase wages

Union wage rises beat non-union every time. It’s basic market theory. If workers bargain individually they are in perfect competition with each other and become price takers. Together they have market power. Hence: “united we bargain, divided we beg”. But the Right doesn’t want you to know that. They want to break the unions to strangle wage rises.

Don’t panic. It’s 3 year since the National Ltd™ “Job Summit”. I’m really looking forward to the 3000km Kaitaia-to-Bluff cycle way, the nine-day fortnight, and the $1 billion contribution from the banks plus $8 billion from government to invest in job-producing industry. Can’t be long now before we start to see jobs being created . . . John promised.

Cameron Slater reckons he’s cracked it; wages are growing after all. What’s his proof? A graph from the EPMU that shows wages have risen 17% and inflation only 15.7%. Wages are up, no crisis! But the man-boy genius needs to check his info better. Turns out that’s the average payrise for EPMU members since 2007. For all workers, the average pay rise was just 13%.

Looking for solutions in all the wrong places 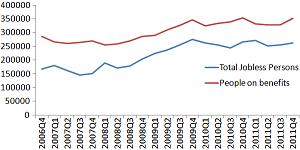 So, naturally, the answer is to spend a whole lot of money forcing solo mums to spend their time looking for jobs that aren’t there.

As controversy swirls over Murray McCully’s leaked emails and the government’s secret position on “restraining China” and McCully is nowhere to be found to answer questions, John Key says “I have absolutely no clue where he is“. Funny, cause he was the one who approved McCully’s travel. Seems a lot of ministers are taking to hiding when the heat comes on.

“I’ve been around these votes before when at the last moment they change” John Key said today about the ALP leadership ballot. He certainly has; in 2003 he promised Bill English his vote then shifted at the last minute to Don Brash who won narrowly. Key talks about Labor needing a repair job; but I think the next challenge may be in the Coalition.

Offical result has 71 for Gillard and 31 for Rudd. Not a base for a comeback for Rudd. He must now be asking why he did it.

Government documents from last year reveal a plan to make ACC boost its levies and pay the government a dividend so that private insurers can compete. But that wasn’t enough. Now, the plan seems to be to exclude ACC from workplace injury insurance altogether. Private insurers just can’t offer cover as cheap as ACC can. So that Nats’ solution is to deny us access to ACC workplace cover.

Bosses move to drive wages down

John Key said he “would love to see wages drop“, and his government has achieved that but they’re just getting started. This is the year when the gloves come off. Ports of Auckland is trying to slash its wage bill by 20%. Talley’s-AFFCO is locking out 750 workers indefinitely. And DHBs are trying to scare nurses ahead of their pay negotiations with the spectre of job cuts.

332,000 people are on benefits, up by 60,000 under National. Coincidentally, there are 250,000 Kiwis who want work but can’t find it, up 82,000 under National. Probably a lot of cross-over between those two groups, eh? So, you can understand why National’s solution is to take a few bucks off a few thousand women.

All in the family

A couple of months after Hekia Parata was promoted to Education Minister, her sister has been promoted to a very senior position in the Ministry of Education. It seems a lot of the Parata clan are experiencing good fortune lately – her husband got a sweet gig ‘explaining’ asset sales to iwi, and several relatives got jobs in her ministerial office.

The courage of their convictions

While most of us talk about “saving the world” some people act.

Eat your fast-food and don’t think

National’s man in NZ on Air, John Key’s electorate chairman Stephen McElrea, was terribly worried about New Zealanders seeing a documentary about child poverty before the election. Informative TV has no place being funded with the public purse in National’s New Zealand. But no such objection to $1.6 million for New Zealand’s Got Talent. It’s the perfect pap to distract the masses. 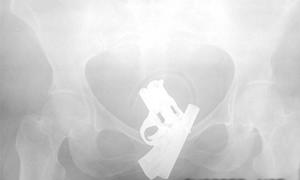 Directorships are the golden ticket in the world of the business elite. You attend maybe 10 meetings a year, sign whatever’s put in front of you, typically get paid $3-4K a pop, and do it over again half a dozen times or more for various companies. It’s a gravy train for managers past their use by date. But customers and shareholders have to trust what directors sign off on.

David Shearer spoke to Greypower in Auckland today about the difference between Labour and National. The speech shows Shearer is his own man. He wants a new style of politics, focussed on the future, planning to make a difference. I think he will.

The biggest party are non-voters.

The option that most eligible voters in NZ supported in 2011 was “don’t vote”.  Nearly 7% didn’t enroll, and if enrolled then more than 25% didn’t vote.  Of the eligible voters from the 2006 census, over 30% didn’t vote at all. And since 2006 the voting population has almost certainly increased. It means that National’s large vote is probably less than the biggest “party”. Not a particularly good mandate unless you’re as deluded as John Key.

Google news has 1.5 pages of articles mentioning David Shearer to John Key’s 13 in the past week. The only ones directly about Shearer or Labour are saying ‘where’s Shearer? He’s wasting his honeymoon’. I wondered what his strategists are thinking. Then I saw they’re all the same people who just led Labour to 27% and I realised the scary part – they’re trying their best.

In a perfect world, we would all live free, in some kind of ideal democracy. We’re not there. But what we and the rest of the developed world have is a hell of a lot better than what the people of Syria have: despotic rule by the murderous son of their former murderous despot. The Syrians are trying to overthrow their tyrant, should the world help?

Show your support for the MUNZ workers in the Ports of Auckland dispute, including a picket today from 10am.