There are three leaks in play this weekend, similar but different. Someone has taken a media shotgun to the Collins / Lusk faction. Hollow Men 2 ?

Out of the shadows

Well, its not taken long for the counter-strike. After Judith Collins’ main brain, Simon Lusk (better known as the cogent Whaleoil) went public last weekend threatening backbenchers that their careers would be short if they didn’t back Collins’ leadership bid when Key goes. Now, documents by Lusk talking about a ‘party within a party’ have been leaked.

As of this afternoon United Future is no more.

That’s because the party can’t reach the 500 member threshold required to maintain its status as a political party.

Further reaction to the Nisbet cartoons, and contact details for making complaints.

I’ve been meaning to write something on Andrea Vance’s very good piece on Simon Lusk. It tells us a lot that we already know: Lusk is the brains behind Slater; Lusk was involved in the demolition of Gilmore; and he’s very tight with the Collins camp. What’s interesting is why he has come out in the public light now. And the messages he is sending to National MPs. The leadership battle is heating up.

Today – by 5pm – is the last day to submit on the draft of Auckland’s Unitary Plan. Generation Zero have made it easy for you with a quick submission form.

Go check out a good post from Julie at The Hand Mirror – “A response to the Can’t Feed Don’t Breed Brigade”.

Images of our time: ‘shock’ capitalism

As Naomi Klein said in the Shock Doctrine documentary, disorienting natural and economic shocks result in the wealth being shifted from “public hands” to the wealthiest.  The wealth gap, and extent of poverty in NZ is increasingly & devastatingly marginalising good Kiwis.  Meanwhile, Peter Jackson is flying high. 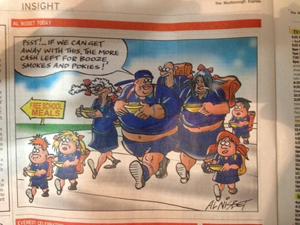 Peter Dunne’s already been caught out being inconsistent around the leak of the GCSB report. He said all ministers were interviewed; but only he was. He said the leak happened while he was overseas (note: not a direct denial); but it happened the day he got back. Meanwhile, Banks is back in the dock over his ‘anonymous’ donation. It’s not looking good for either of them.

The Battle of Auckland

“The Auckland that never was” in my view is the most interesting chapter in Chris Trotter’s “NO LEFT TURN”. It details the Ministry of Works’ post-war plan  outlined in a document The Shape of Things to Come that was scrapped by the Sid Holland National party. Now we see history repeating itself. In what Labour accurately describes as a “War on Auckland” Key, Joyce and Brownlie are following in the footsteps of the much unloved Sid Holland.

You can get all excited over every poll you see from people who poll a handful of times a year. You can try to read meaning into every bump and dip to fit your narrative, even if the ‘movements’ are just statistical noise. Or you can look at the trends.

Submit on the Unitary Plan now!

The draft unitary plan, while not perfect, is a key part of making Auckland the most livable city. The plan is a progressive document: we know urban sprawl hurts the poor and creates worse health, social and economic outcomes. Generation Zero have put together an easy quick feedback tool so that you can submit on […]

Shocking the people into submission

Last night The Shock Doctrine (2009) aired on Maori TV.  John Key, and his cheerleaders have followed their latest series of shock-inducing attacks on democratic processes and (low income) people’s rights, with positive forecasts for our future. Meanwhile, the gap between the haves & have-nots has grown.

So, the latest Fairfax poll isn’t flash for Labour and it’s the same old story of leadership. But don’t get too excited there’s no ‘trend’ in the Fairfax – they’ve polled just three times since the election. We also know that most pollsters have been over polling National for years. Instead, lets ask what the polls show now compared to the immediate pre-election poll.

Nats split on food in schools?

Does food in schools show up a split in National between the hardline conservatives who would leave kids hungry in the name of parental responsibility, and pragmatists who will swallow a dead rat every now and again in an attempt to stay popular? The government’s expansion of the KickStart breakfast programme is better than nothing – but that’s about all you can say about it.

Answer to be revealed. Update: $9.5 Million.

The wheels are falling off

The Nats have tried to do too much too soon, and now the wheels are obviously falling off their sad “flagship” privatisation programme.

John Key and David Shearer have made similar (inaccurate) statements about who has  ultimate responsibility for feeding the kids.

I reckon replace “Muslims” with “non-white” and you’re getting closer.

Good to see a case where Labour is clear about repealing some of National’s damaging law changes.

National has set out its narrative for the 2014 election. Time for the Left to do the same.