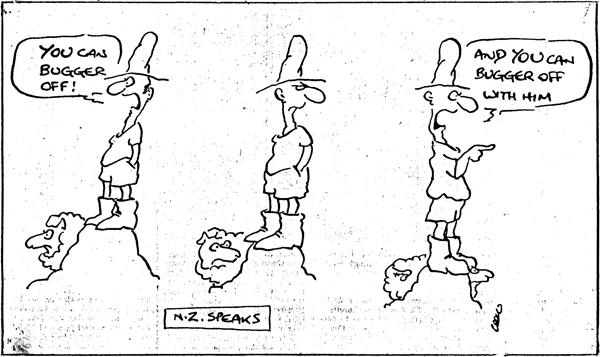 I have never been prouder of NZ than I was when we went Nuclear Free. We put principle ahead of profit, we stood up to some heavy diplomatic pressure, and we spoke our piece to the world. Lange in the Oxford Union debate – magnificent (a redeeming star amidst all of the other damage that that government wrought). 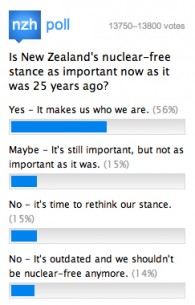 Hard to believe it was 25 years ago.

Things are looking good for the future too. I don’t think that even the Nats will mess with Nuclear free now – it remains iconic for too many people if the recent (unscientific, right-leaning) Herald poll is anything to go by.

It’s not all roses however, from The Herald on Friday:

New Zealand marks 25 years of being legally nuclear-free today – but a Kiwi who has made nuclear disarmament his life’s mission is leaving the country because of a lack of local support.

Tauranga-born Alyn Ware, who set up a global network of Parliamentarians for Nuclear Non-proliferation and Disarmament in 2002, will speak at a concert in Auckland’s Aotea Square tomorrow marking the 25th anniversary of the anti-nuclear law.

But the Wellington office from which he has co-ordinated the global network for 10 years has closed because of cuts to NZ Peace Foundation funding.

Next month, he will take up an offer of office space at the University of Basel in Switzerland, with support from Basel council. “The countries that are picking up the disarmament ball are no longer down here. New Zealand is no longer a big player in this,” he said.

That’s a sad way to mark an important anniversary.