There’s plenty of good posts around already on National’s election list, how its dominated by white men and there’s very little room for new blood. But just how bad is their list? I thought I would do a comparison of the ethnic and gender balance of the National, Labour, Green, and ACT lists. Judge for yourself. 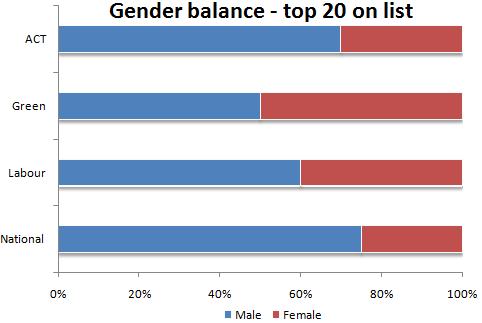 Oh dear, National only 25% women in its top 20 and is the only party without a woman in its top five. It has the most male-dominated top 20, even beating the Angry Old White Man Party. The gender balance doesn’t improve until you reach unwinnable slots. A strong performance by National would probably see the gender balance of the Parliament worsen for the first time in many elections.

The Greens and Labour have real gender balance while ACT’s performance is may appear surprisingly strong but don’t be fooled – or the remotely winnable slots, only one has a female candidate (assuming Number 3 is Catherine Isaac) 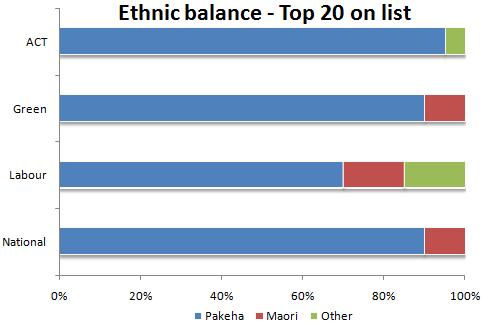 I’m not for tokenism. But the Right’s claim that the only way to get the Left gets diversity in its lists is by tokenism tells you a lot about what they think about women and non-Pakeha. Unless your party is inherently about the privilege of one group in society (cough white men cough), you’re going to find that you have talented people of all groups in your ranks. In fact, if you look lower on National’s list, it’s clear they engage in a lot of tokenism – as in their 2008 list, the late 30s is where they’ve plonked all the token MPs, high enough to get in, not high enough to have any power, and surrounded by white men above and below.

The Green’s lack of diversity is a bit disappointing, although if you define a Pakeha is only a New Zealand-born person of European extraction the Greens have 10% less Pakeha and 10% other (an Aussie and an American).

Assigning ethnicity is obviously a bit fraught. It’s always best to go with self-identification I guess, so Paula Bennett and David Clendon are both under Maori because, at times, they make reference to their Maori lineage. For similar reasons, I didn’t try to do a comparison of sexual diversity. 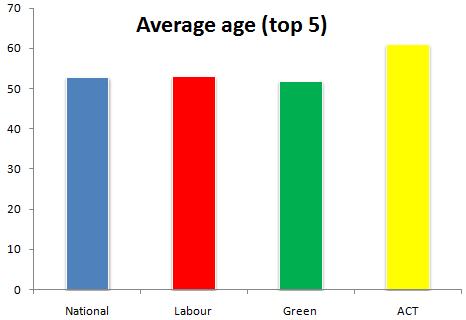 So what’s this about Labour being tired and old? Their top 5 has the same average age as the Nats’.

The Greens have the youngest leaders by quite a way but the average is dragged up by Kennedy Graham.

ACT confirms it really is the Angry Old White Man’s Party with all of the top 5 being Pakeha, 3 being over 60, and only 1 woman (all this assumes Number 3 is Catherine Isaac)

38 comments on “Analysing the lists ”