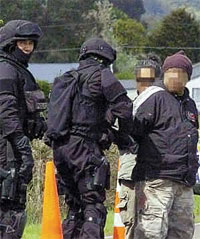 Indymedia reports that “In a wave of massive state repression, 300+ Police, in many cases armed, raided houses around the country today making 17 arrests.” They also claim the raids were “targetted at people involved in the Tino Rangatiratanga, Peace and Environmental movements.”

Search warrants were carried out in Wellington, Auckland, Whakatane, Christchurch, Palmerston North, Hamilton and Ruatoki. Most who appeared in court faced weapons charges. The Police have apparently yet to seek advice on laying charges under the Terrorism Supression Act 2002.

Stuff has a lot of coverage, the latest of which quotes “left-leaning commentator”, Bomber Bradbury as having said “middle New Zealand will recoil in horror” when it hears of the reasons for the police raids.

Also sounds like more arrents and charges are a possibility. More coverage and video at Scoop including this TV3 video of a raid in Wellington.