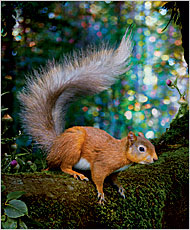 Stuff reported yesterday that the New Zealand Kiwi Foundation is warning that “New Zealand’s national icon, the kiwi, could face extinction within the next 20 to 30 years, unless more is done to protect the fragile, flightless bird”.

They’ve launched the ‘Fragile Kiwi’ campaign to help reverse a downward trend in kiwi population numbers caused in part by attaks from domestic cats and dogs. The campaign encourages holidaymakers to either leave their pets at home or keep them inside over night.

The NYT writes that the UK is facing a similar problem with native Red squirrels, who are being ousted by introduced grey squirrels.

…over time the red squirrel became beloved in Britain. It supplanted the realm’s old icon, the lion, as the symbol of a gentler, more evolved nation. There was Squirrel Nutkin, Potter’s irreverent playful red, and also Tufty Fluffytail, the Safety Squirrel, a public-service creation whose warnings about danger on the road began in the early 1950s and lasted until the ’80s. As the red rose in popularity, the gray sank in public esteem. Potter’s attempt to follow up Squirrel Nutkin with a story about a gray squirrel, Timmy Tiptoes, did not achieve the same success. In 1922, a government permanent secretary was quoted in The Times of London calling grays “sneaking, thieving, fascinating little alien villains.”

For more on the NZ Kiwi Foundation you might want to visit their site.