Hillary Clinton is currently less popular then Donald Trump. Yup. Not surprisingly, Bernie Sanders is still the most popular politician in the US.

In the UK, Jeremy“unelectable”Corbyn would apparently become PM if a general election was to be held tomorrow.

In pre-Corbyn Scotland, the SNP rocketed from 6 seats to 56 seats in the 2015 UK general election and then almost won an outright majority for a second time in the 2016 Scottish Parliamentary elections under a system specifically designed to prevent outright majorities.

In the French Presidential election, Melenchon came from nowhere to secure just shy of 20% support in the first round of voting.

The common thread that runs through all the above is a campaign platform that’s decidedly Social Democratic and a message that’s an explicit rejection of Liberalism.

Even in the case of Trump in the US, or Trudeau in Canada, a faux rejection of Liberalism worked just fine in terms of securing office or cabinet. It’s a powerful meme.

Meanwhile, the fortunes of those who have remained wedded to the broad Liberal framework continue to get ever bleaker.

The US Democratic Party remains more or less dead in the water. And while Corbyn’s Social Democratic priorities and concomitant rejection of Liberalism might be giving UK Labour a huge boost, the same can’t be said for Scottish Labour that essentially remains a party of Blairism. Scottish Labour will only gain the ascendancy in Scottish politics again when Dugdale and her cohorts depart the stage. Until then, and allowing for a slight lift from the Corbyn effect, they will continue to play second fiddle to both the SNP and the Tories. (Scottish Labour is currently the third party behind the SNP and the Tories at Holyrood in terms of seats)

Coming closer to home, NZ Labour, that has successfully resisted pressure to call out Liberalism and adopt a Social Democratic platform these past few years is, lets face it, in the doldrums. From the leaked NZ Labour internal polling, it seems that NZF are the ones enjoying the most traction in the polls. (Look at the trajectory) 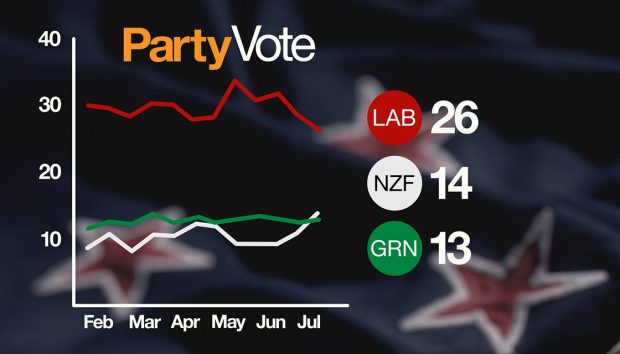 And what does Winston Peters keep dropping into his commentary? Yup. He keeps reminding people that the neo-liberal experiment of these past 30 years in NZ has failed.

Now, NZF are a genuine social democratic party. But that doesn’t make them ‘left’, and I’d really rather not see them with significant influence after the 23rd of September.

And that brings us to the Green Party.

This is the only other party aside from NZF that isn’t instantly recognisable by both policy and stated priority as being Liberal. But then again, it’s just not clear what they are. I’ve previously referred to the Greens as the TEDTalks party. And I’ve used that label, because although they say nice things and suggest good stuff, they seem to exist in some nowhere world that straddles social democracy, liberalism and some strange a-political new age space.

But I find it maddening that the party itself doesn’t seem to recognise this, or that if it does recognise it, feels unable to stand firmly and squarely on a Social Democratic platform and speak to both us and Liberalism from that vantage.

I mean, why didn’t Metiria state the obvious as a part of her launch of the Greens Social Security policy – that the Liberal experiment of the past 30 years in NZ has failed? It’s one line. A signal. A signpost. And it works (Just ask Winston…or Trump…or Sanders…or Corbyn…or the SNP…or Melenchon…or Trudeau..)

So could the Greens ‘break left’ and emulate Corbyn or the SNP or Sanders?

Well, the SNP had an influx of some 100 000 members prior to their astonishing UK election result in 2015. Corbyn had Momentum and a couple of hundred thousand members to knock on doors and flood social media prior to the UK Election just been. Sanders had a huge grassroots organisation propelling him in his bid for Democratic nominee.

So being realistic, it’s probably sensible to caution that the Greens lack the necessary ‘party machine’ to ‘do a Corbyn’. And two months probably isn’t enough time to create any such machine. But then, Winston Peters and NZF have no such machine either, and there’s no denying the rate of the traction they are getting in the polls.

So lets say the Greens call it. Let’s say they stand proud on Social Democratic values and “call a spade a spade” insofar as Liberalism goes. Maybe they lose some support to TOPs, who will then sit on the cross benches after 23rd September. And aside from that? Well, they’ll hoover up votes. And who knows? They just might end up giving NZ Labour a run for their money to occupy that space as NZs second largest party in Parliament. They’ve certainly got nothing to lose.

Also, any challenge to Winston on that field where he’s currently enjoying a free run can only be a good thing. He absolutely will be gathering up misguided votes from people who think of themselves as left – who know in their gut that the past 30 years of Liberalism constitute a disaster, and so with that in mind, are reticent about voting for NZ Labour.

There are only two distinct platforms a parliamentary party can stand on in a capitalist context that contains a representative parliament. One is Social Democratic (putting people and society first). The other is Liberal (putting markets and finance first).

So Greens. Break left. By your policies, you already stand somewhat on the first of those two possible platforms mentioned above. All you need to do now is plant your feet squarely and firmly and speak from that place. You won’t live to regret it.