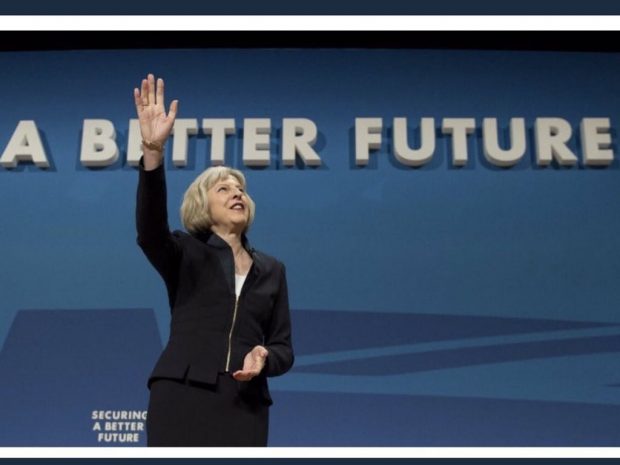 It has been a hell of a month for the UK.

Boris Johnson is riding the wave. He resigned as a Minister on the basis that May was not being staunch enough.

Here is his resignation speech to Parliament.

And after receiving a ringing endorsement from Donald Trump the sky must be the limit for Johnson’s plans.  Just what the world needs, another idiotic right wing male leader.

Then there was a vote in Parliament where Conservative MPs put up a hard Brexit amendment. It was passed, just, thanks to the support of four Labour MPs. This was a potentially Government ending vote and four Labour MPs voted to preserve May’s reign. The UK could have had a vote of no confidence and a general election instead.

The Liberal Democrats went missing. Literally. And the Conservatives broke all sorts of Parliamentary conventions to get their vote over the line.  They were that worried they broke the convention on the pairing of votes and falsely represented to Liberal Democrat MP Jo Swinson that she could skip a crucial vote to look after her new baby.  When you add on the missing votes of Lib Dem MPs Tim Farron and Vince Cable who both were inexplicably missing that three vote majority looks very slim.

Then Jeremy Corbyn faced an attack by pro Israeli MPs because the Labour party was still grappling with a definition of anti semitism in a policy. The timing was extraordinary. It is as if some people do not want him to be Prime Minister and will use whatever weapon they have. I hope they face a Momentum inspired re-selection battle soon.

And some of those involved in the Vote Leave campaign face the prospect of prosecution. The organisation was fined £61,000 and referred to the police after the Electoral Commission found that it had broken electoral law by exceeding its £7m spending limit through funnelling £675,315 to the pro-Brexit youth group BeLeave.

Then to really top things off a poll was released yesterday suggesting that the electorate is deeply divided between those who want to BREXIT now and those who don’t.  From the Week Day:

Voters opposed to Theresa May’s Brexit plan would be prepared to turn to a far-right party in protest, a major new poll into the mood of the nation has found.

The Sunday Times says the YouGov survey, “will spark unease in Downing Street”, coming after a tumultuous couple of weeks in Westminster that saw the prime minister lose two senior members of her cabinet before narrowly avoiding defeat on a customs union backstop amendment that could have led to a full-blown leadership challenge.

Reuters says “May’s political vulnerability was exposed by the survey” which found voters would overwhelmingly prefer Boris Johnson, who resigned as foreign secretary in protest at the Chequers Brexit White Paper, to negotiate with Brussels and lead the Conservatives into the next election rather than the current prime minister.

Despite his star fading somewhat over the past year, Johnson remains a popular figure both within the Tory party and among prospective voters, with his support likely to grow if he is seen by MPs as someone who could prevent votes leaching to populist parties.

This threat is highlighted by polling which found around 38% of people would vote for a new party on the right that was committed to a Hard Brexit, while 24% are prepared to support an explicitly far-right anti-immigrant, anti-Islam party.

One in three voters, meanwhile, are prepared to back a new anti-Brexit centrist party.

“On this evidence” says Politico, “the conditions look perfect for a fundamental realignment of the British party system”.

It is as if the two tribes are realigning themselves in a somewhat disorganised fashion behind both slogans (remain or leave) without thinking too much about the reasons.  The political difficulty for the left is that there are a significant number of conservative working class voters who agree whole heartedly with the anti immigration nature of the proposal.  For too many Brexit means giving the middle finger to immigrants whereas for some in the Conservative Party they can see that hindering free trade and capital flows is not conducive to Globalisation and will in all likelihood cause major economic disruption.

And Judith Collins thinks it is all very interesting.  I wonder what she is planning? 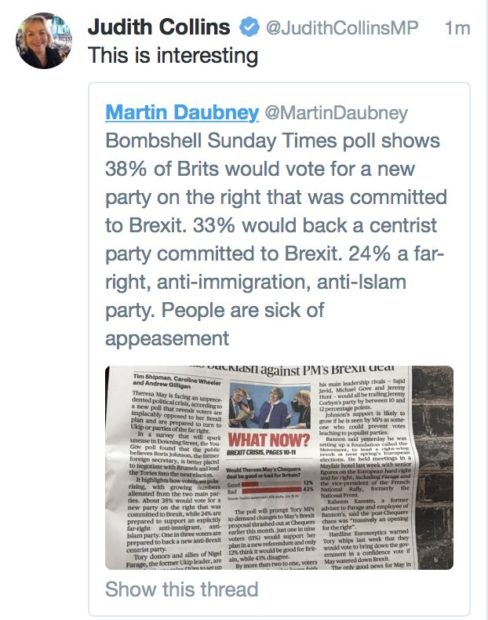 75 comments on “Brexiting the EU ”