You have to wonder about the actual abilities of Bryce Edwards. There is a reason that I seldom read his waffle about politics in various publications. That is that he shows no particular nuance or understanding of politics or political debate as it works outside of broadcast mediums.

Instead he appears to prefer to simply write bullshit that is shaped around his own biases and simple minded bigotry. As far as I can see he never seems to attempt to actually understand real political debate. Reading his output, it is pretty clear that he hasn’t got a clue about politics except in some very specific historical perspectives. It just reads like fairy stories to children or some poorly written sitcom plot.

Bryce Edwards is mostly noticeable to me in the way that he just seems to shunt everything into narrow silos of some kind of predetermined frame work. It rather reminds me about why New Labour was unable to be even remotely useful before it folded into ignominious in-fighting. I really have a problem with political silo people like many who were in New Labour including Bryce who just seem to unable to work together.

In short, in my view, he is about as useful to political debate in this country as his equivalent on the right – the equally simple-minded Mike Hosking – who does the same thing without the same education. It just seems to be a characteristic of some people who comment with bothering to do the work to actually understand what is really going on. It always feels like just someone being mind-numbingly lazy or being particularly stupid spinning for pay.

Take this for instance, in an opinion piece about Kiwibuild. “Bryce Edwards’ Political Roundup: The Political left is turning against KiwiBuild“.

Even the pro-Government blogsite, The Standard, is publishing criticisms of the scheme – see: KiwiBuild doesn’t fly. 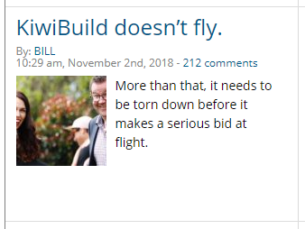 Yeah right. That characterization is a blatant misrepresentation of how the site and the people writing in it actually operate. Bill wrote that post – “The Standard” did not.

It explicitly implies some kind of political editorial line. But even an intellectual idiot should have realized by now that the site doesn’t operate that way. After all we have been doing much the same for the last 11 years. It isn’t exactly new.

Posts are put up to provide a starting point for robust debate and they sure do. That post was not that unusual – it has 212 comments as I write this and they are just about covering the spectrum of ideas on the topic. It was a debate starter coming from one persons view on Kiwibuild.

We’ve had about 80 authors write posts here and the only real characteristic of them is that they tend to be leftish and extremely diverse in their opinions. We simply don’t editorialise much beyond who gets given a author level login. We seldom kick off authors once they get a login and in the only actual case it wasn’t for viewpoint, it was because they started wasting every other author’s time with lousy feuding behaviour. Even then they will eventually get their author privileges back if they can show other authors that they’re unlikely to waste my time and theirs (yeah I’m looking at you TRP).

This diversity is pretty apparent in the 23,00 odd posts that have been put up on my servers. The people who comment have an even wider spectrum of views.

Who gets to write the starter posts for comment is usually based on recommendation from someone already writing for us. Or it could be someone who has demonstrated that they know how to write interesting pieces for discussion – a lot of our authors get given their login based on how they have commented here. It sure as hell isn’t from some adherence to membership of any particular party or ideology. It is becasue they’re interesting when they write.

Authors, once they get a login, get an almost complete freedom to publish their own posts and their own content. The only time that I or any of the other ‘editors’ (ie: someone with privileges to fix other author’s omissions like tags or images really bad grammar or spelling) will actually get interested in the content of a post is if it breaks the law somehow, or leaves us open to civil actions, or if it starts causing too much deliberate disruption within the author and commentator community. In the latter case I will sometimes cut the Gordian knot if it starts wasting too much time or starts sucking up too much time in moderating.

We have advocates for principles that underlie the movements for labour, greens, liberals, command economies and free markets and just about everything else that could vaguely be lumped together as leftish.

Bill, who wrote that post, isn’t exactly a fan of the Labour Party either here or in his homeland. This isn’t hard to discern. You just have to press the link on his handle Bill and read his posts. When we gave him his author login it wasn’t because he was a Labour Party member or supporter. Far from it – he is invariably a critic of the party and government (no doubt he will inform me if he has ever actually supported them in his writing), and that is what I expected him to be.

He had the author login offered was because he was described to me as being a semi-anarchistic contrarian who knew how to write and who wouldn’t get too upset at rejection of his ideas. That he would provide a area of opinion writing that we didn’t have and that he wouldn’t run out of expressible opinions in a hurry…. And he is certainly all of that.

He also fitted our rather general criteria for authors as has been expressed in our about for the last 11 years – something that Bryce Edwards appears to have never deigned to research.

We come from a variety of backgrounds and our political views don’t always match up but it’d be fair to say that all of us share a commitment to the values and principles that underpin the broad labour movement and we hope that perspective will come through strongly as you read the blog.

That doesn’t mean that I or even many of the authors here would actually agree with Bill on most of his expressed opinions. What we do tend to agree upon is that his ideas are something up for debate.

So in defense of Bill, I’d have to say that in accordance with our about, he writes for himself on this site. I suspect that he’d be pretty aggravated to think that he was writing as a Labour supporter 🙂

We’re a cooperative who saw a gap in the New Zealand political blogosphere and decided that we should have a go at filling it here at The Standard blog site. We write here in our personal capacities and the opinions that are expressed on the blog are individual unless expressly stated otherwise (see the policy). We do not write on behalf of any organization.

I suspect that Bill isn’t particularly interested in having us to agree with him. In fact, if I had to guess, Bill would probably be pissed if his ideas actually ever came to fruition. Because by then he’d have moved onward and would be critiquing his earlier self.

Personally I certainly don’t agree with Bill on much. I’d be a conservative voter by natural inclination and after a lot of reading on the rather depressing history on rapid societal changes. But I was granted rather too much intelligence, curiosity and education to believe that market forces were useful for sustained strategies like building coherent transport networks or housing or even just raising a kid to be an adult.

Businesses seldom manage to look more than about 2-5 years. That is my view that having spent my working life in the private sector and especially after studying business when I did an MBA has only reinforced. I also think that bureaucracies are often a dead-weight pain-in-the-arse that get in the way of innovation (hey – I’m a computer programmer). Which makes me politically a liberal in the English political sense and a reluctant but ardent socialist.

The point is that any site that contains both me and Bill writing posts will never have a common editorial policy except for procedural mechanics about how to operate the site (and we usually disagree there as well).

Now that leads me to my opinion of functionally dimwitted political ideologues broadcasting their own simple-minded personal views as if they were gospel. Just like Bryce Edwards and Mike Hosking routinely do.

As far as I am concerned they are classically simple minded authoritarian freaks who could only thrive in broadcast mediums. Which is why I don’t think that I have ever seen either of them engaging with people who coherently critique their viewpoints. I suspect that they are both have rather fragile egos and really wouldn’t know how to handle any real criticism from people who are living the sharp end of the life that they are trying to explain. Both appear to live lives divorced from anything that would make them grow up and see the other points of view.

Neither of them appears to be capable of understanding how to debate real political ideas in the robust manner that this site was designed to provide.

Perhaps Bryce at least could pay lip service to trying to understand those who can do robust debate and not to try to point to editorial controls that simply don’t exist. At least with him, I’d have some hope that he’d be flexible and broad minded enough to try that.

Based on what I have seen and heard, I think that Mike Hosking  is too self-entitled to be capable of attempting even that simple task. 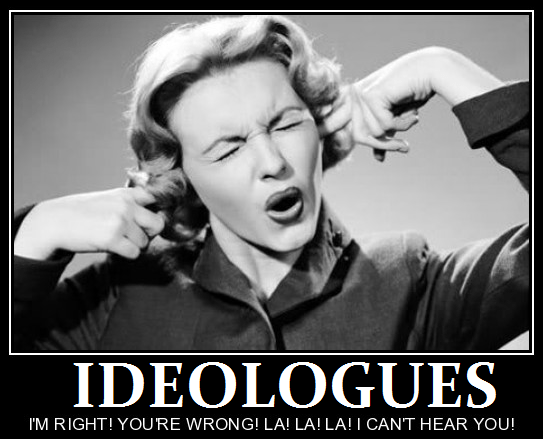