Much as I am loath to link to them, Hobson’s Pledge consists of these fine folk. They have been delivering their pamphlets round NZ for some time now: Peter Dunne appalled by ‘racist’ propaganda delivered to Wellington homes

On the issue of supposed “Maori privilege” see our own mickysavage:
He isn’t a racist because his ex wife is from Singapore

Although they are attacking National’s current policies, which they regard as “appeasing Maori”, Don Brash is clearly hoping to appeal to some of his old mates in the party:
Where Nats stand on Hobson’s Pledge issues

With the election they are of course doing another round of pamphlets. Fortunately we the people are coming up with some good uses for them…

Thanks for the contribution towards tonight's fire, Hobson's Pledge. pic.twitter.com/qapZ8yHbRJ

My cat pees on your propaganda, Hobson's Choice pic.twitter.com/zD4JaGK4zC

— still possessed by the promise of the Pleasuredome (@daphlawless) June 21, 2017

Could there be a more disgusting placement for a Hobson's Pledge billboard than looking directly at the Pipitea Marae? pic.twitter.com/9L6YYIOaJY 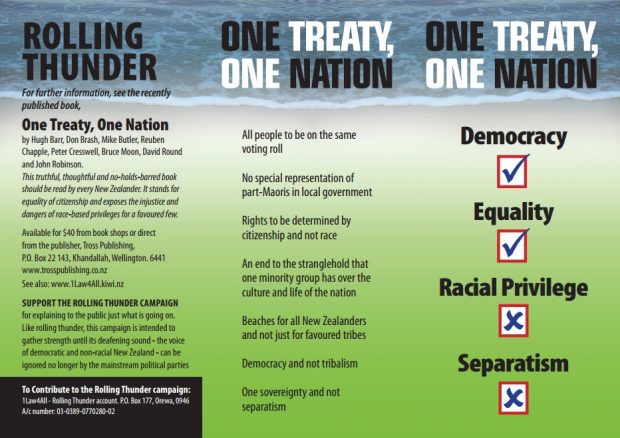