We’ve never had it so good – the luxury and extravagance of our lives threatens the planet, we have so much… but somehow our lives seem to be a constant psychological battle against stress and emotional exhaustion.

Richard Wilkinson and Kate Pickett are a pair of epidemiologists with over 50 years of research into the social determinants of health between them; trained in tracing the causes of disease in populations.  They started trying to work out why the life-expectancy of one suburb can be more than 10 years less than a neighbouring wealthier suburb, and have ended up with something that could be called ‘evidence-based politics’.

They make no claims to be left or right on the political spectrum, and got top politicians from all parties to sign up to their equality pledge before the recent UK general election – including the new Conservative Prime Minister David Cameron.  Rather their philosophy is purely a scientific view of what works best for people – all people – in a community.

Research show that people feel that ‘materialism’ is coming between them and happiness.  People feel they are alone in wanting society to move away from greed and excess toward a way of life more centred on values, community and family – but in fact the vast majority feel the same way.  Mainstream politics doesn’t seem to tap into this feeling, and as such many have given up on society, and feel only able to better themselves as individuals – to society’s further ruin.

But what is the proof of the cause of the decline of community and the rise of the broken society? 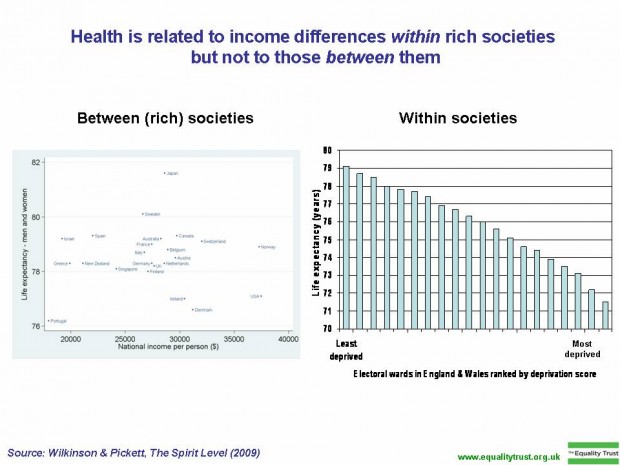 This graph shows that above ~$US20,000 GDP/person, growth of wealth makes no difference to life expectancy.  But wealth within a society makes a great difference to life expectancy.  So additional wealth doesn’t gain a country more life for its citizens.  In fact we can generalise across a whole set of health and social indicators – additional wealth doesn’t seem to help with any of them: 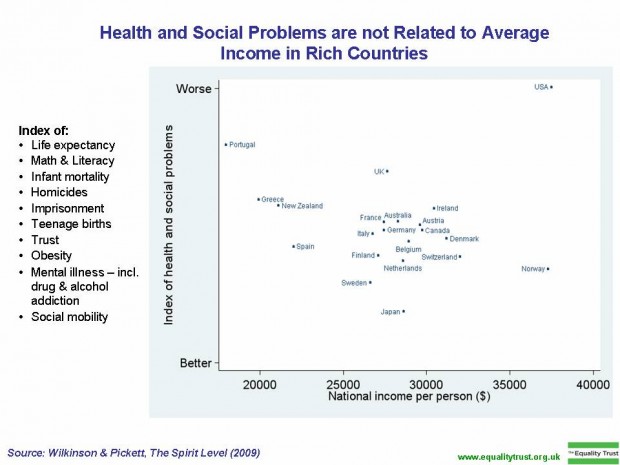 But the rates of these various problems definitely varies between countries.  So what’s the difference between the US, UK & Portugal, coming out badly on so many indicators; and Japan & Sweden, which do so well? 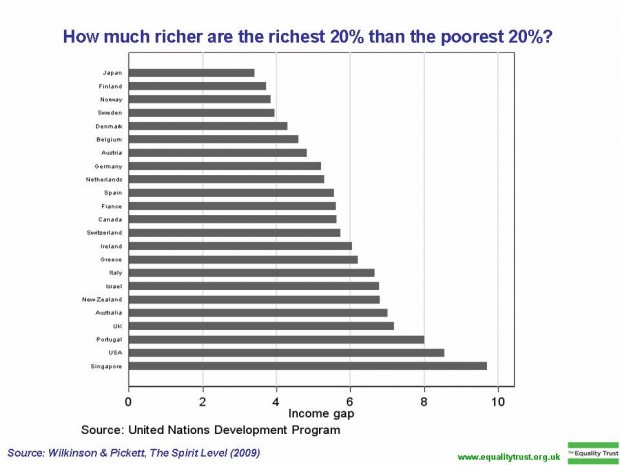 Some countries have a far greater income inequality than others – the US, UK and Portugal are very unequal.  That’s us there, just above them after our great rise in Gini (link) in the late 80s and 90s.

So how does the graph look if we correlate with income inequality? 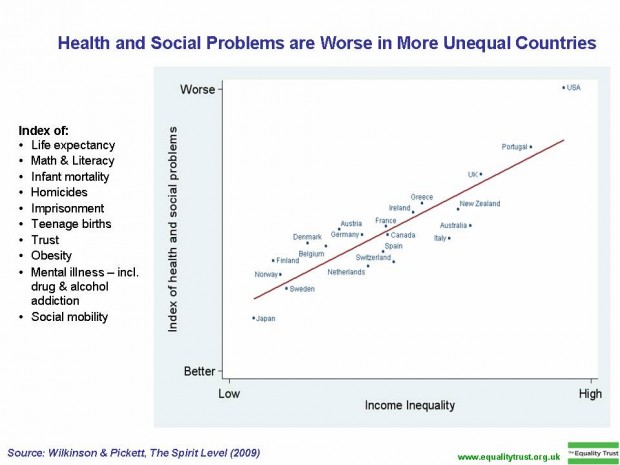 Suddenly the graph is linear.  There are various ways of measuring inequality (Gini, Robin Hood index, richest vs poorest 10 or 20%…) they all come out with a graph very similar to this.  The graph comparing US states inequality to social and health problems comes out similar as well.  So there is definitely a link between these problems and inequality.  I’ll go into more depth in each area in later blogs.

The Spirit Level authors believe income inequality is largely important as it is our current way of measuring hierarchy in society.  Other forms of inequality are probably important too, but income is where the data and evidence is, and it is the way society currently values people.  A certain level of wealth is required but in the wealthiest 50 nations virtually everyone has access to that.  So the problem is social distances and stratification – keeping up with the Joneses.

Second rate goods equals second rate people.  Status matters.  Having less than those next to us makes us anxious and stressed.  It affects our self-esteem.  We become self-promoting and insecure, as we are constantly in a race and scared of being found out as not as important (ie wealthy) as we make out to be.  We have less time to make and keep friends as we spend all our time trying to earn and spend our wealth to maintain our place.

In a more equal society the race isn’t so all-consuming, we have more friends, more trust, more community and more happiness.  But no less wealth.  He who has most toys doesn’t win, he just makes sure others lose out more.