Drones have been all over the news these last few years, and America’s indiscriminate use of drones is both a hallmark of and an indictment of Obama’s presidency. I guess it’s no surprise to find that they have flown in NZ airspace:

With a price tag of $250 million and a wingspan greater than a 737 airliner, Global Hawk surveillance aircraft are amongst the largest and most expensive unmanned aerial vehicles (UAVs). The US has tried to keep their operations secret. But Civil Aviation Authority documents released to the Herald under the Official Information Act say the mega-drones have flown numerous times in New Zealand airspace.

“Most [UAV] activity is from military users who are well informed and usually conduct operations away from the commercial airspace corridors,” reads an issue assessment paper from last year. “There have already been a number of occasions when Global Hawks [35-40 metre wing span, 3 tonne payload] have traversed New Zealand’s oceanic airspace transiting between Australia and the US.” …

A spokesman for Defence Minister Jonathan Coleman said he would not comment as there had been no involvement with the NZDF.

Must admit I didn’t know that:

The NZDF operates its own Kahu drones in what Ms Rendall said was a “limited interim capability for military tasks”.

And of course the police are getting in on the act (albeit with drones that are a lot less scary than a Global Hawk):

Police have confirmed to 3 News they have purchased a spy drone or unmanned aerial vehicle for use in criminal investigations. They say at this stage the technology, used in war zones such as Gaza and Afghanistan, is only being trialled here. Greg O’Connor of the Police Association says it is an innovative breakthrough for the force. “It’s smarter, it’s cheaper, it’s more efficient,” he says. “Why wouldn’t police use it?”

See David Beatson at Pundit for a discussion.

Mmmmm. With all this drone activity, I wonder if we will see an increase in this kind of response – from a recent article in the Guardian (which I initially thought was an April Fool’s joke, but apparently not): 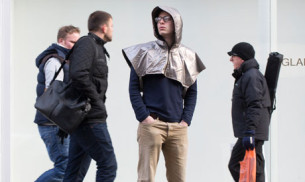 I am wearing a silver hoodie that stops just below the nipples. Or, if you prefer, a baggy crop-top with a hood. The piece – this is fashion, so it has to be a “piece” – is one of a kind, a prototype. It has wide square shoulders and an overzealous zip that does up right to the tip of my nose.

It does not, it’s fair to say, make its wearer look especially cool. But that’s not really what this hoodie is about. It has been designed to hide me from the thermal imaging systems of unmanned aerial surveillance vehicles – drones. And, as far as I can tell, it’s working well.

“It’s what I call anti-drone,” explains designer Adam Harvey. “That’s the sentiment. The material in the anti-drone clothing is made of silver, which is reflective to heat and makes the wearer invisible to thermal imaging.”

The “anti-drone hoodie” was the central attraction of Harvey’s Stealth Wear exhibition, which opened in central London in January, billed as a showcase for “counter-surveillance fashions”. It is a field Harvey has been pioneering for three years now, making headlines in the tech community along the way.