Exclusive Brethren: at it again 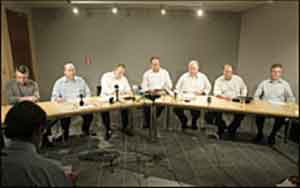 The thought of losing his seat must be making John Howard desperate. It’s been revealed that he’s recently met with senior Exclusive Brethren officials including one who is being investigated by Federal Police over the funding of pro-government advertising.

For a group of people who don’t vote because they believe it interferes with God’s right to ordain who rules on earth I would have thought that the Exclusive Brethren’s continued activism in worldly political affairs has them sailing pretty close to the wind.

Marion Maddox puts the change of heart down to a newfound belief under ‘Elect Vessel’ Bruce Hales in what she calls post-millennialism – the idea “that actually Jesus’ return is not before the tribulations at the end, but after, and it can only happen once Christians have taken over the reins of government, and got the world under Christian control”. The Exclusive Brethren believe then that conservative political control will bring about the rapture, and only then will they be saved.

So Howard winning really could be the beginning of the end… and not just for Australian political progressives.

It’s also a timely reminder as the debate on election funding here in New Zealand heats up that electoral reform is desperately needed. The Exclusive Brethren tried to buy the last election here with a covert and unprecedented $1.2m smear campaign. That was 10 times more than any other independent group – and more than half the total cap any one party was allowed to spend.

The Brethren and their supporters are casting the reform issue solely as one of free speech. People do have a right to free speech but they also have a right to a robust and transparent democracy. A laissez-faire approach to the law governing campaign finance won’t provide it.