One law for the National Party 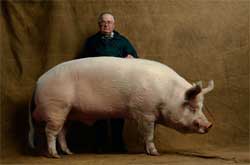 John can’t seem to get his story straight (again). Since he claims to support the concept of ‘one law for all’ let’s start with that.

Under the Electoral Act you can reside in one place only. Under the Companies Act you cannot make a statement that is knowingly false or misleading.

In October 2002 Key told the chief electoral officer he was living in Helensville. In March and April 2003 he told the companies office that he, as a director of Earl of Auckland Ltd and Haunui Dairy Ltd, resided in Remuera.

If, for the purposes of the Electoral Act he was in residing (as stated) in Helensville, then he could not be residing at the Remuera address he had listed with the Companies Office. If he was residing in Remuera then he was living in more than one place putting him in conflict with the Electoral Act.

So he’s either mislead the chief electoral officer (as he told the companies office again in 2003 and 2004 that he was living in Remuera) or he’s given the companies office fraudulent information. These aren’t trivial offences. A false statement against the Companies Act has a term of imprisonment of up to 5 years or a fine not exceeding $200,000. Labour’s David Parker stood down for a much more minor offense against this Act after allegations made in Investigate magazine.

In typically dismissive style National Party activist David Farrar plays down the offending on his Kiwiblog. He defends Key by claiming, “he actually went and got a written legal opinion from the Clerk of the House which advised how he could register a different electoral address to a company’s address.”

But that is absolutely not the point. Key is now saying he never lived at the house in Helensville where he and his wife were registered for three years. That is an offence against the Electoral Act, which says that a person can have only one address, lives at the place where he or she chooses to make their residence for family or personal reasons, and the matter is determined by the facts of the case.

The purpose of these provisions in the the law is to make sure that people cannot vote more than once, and cannot choose where to exercise their electoral vote for political purposes as John Key clearly did in 2002. He can’t argue that it was an oversight as he and his wife remained on the Helensville roll through 2003 and 2004. In both those years his electorate secretary was also registered at the same address – but nobody is suggesting a menage a trois!

What would be interesting to know is what question did John Key ask the Clerk of the House to rule on, and what factual assumptions did the Clerk make in his ruling? It would be highly surprising if he had indeed cleared Key of lawful enrolment at an address where he did not live. If John Key were to release the whole of the letter it may help clear that point up.

Key still has questions to answer – Why does he keep changing his story? Bill English’s defense is “who cares?” It seems as though when it comes to the Electoral law the National Party position is that it doesn’t apply to them.

It seems that Key and English are following in Don Brash’s footsteps after the Exclusive Brethren rort of 2005.