Paediatrician Professor Innes Asher has written an open letter to the Welfare Working Group lauding their aims, but warning that their recommendations will harm children.

Child Poverty Action Group and Every Child Counts have endorsed the letter, bringing with them a considerable number of academics and other experts in the fields of child health and social policy.

The letter was tabled in parliament last week, so National will not be able to deny knowledge of the issues and expert thinking when they go into the election making welfare an issue and beneficiary-bashing a sport.

Innes Asher systematically goes through the reasoning and expected results of the Welfare Working Groups proposals.  She works at the sharp end of child poverty as she says in the introduction:

I am writing to you about this, because as a paediatrician I see many children with preventable diseases causing life-long damage (such as bronchiectasis – permanent lung scarring from respiratory infections) founded in lack of resourcing of their families. As an academic I am aware of the evidence showing that our children’s health outcomes are poor by international standards (1), some preventable childhood diseases are increasing (2) and that under-resourcing of the most disadvantaged children by state policies is a factor (3).

She sees 8 issues pertaining to the well-being of children:

And then goes through each, in devastating detail, showing why the WWG’s suggestions are wrong – morally, financially, socially.

I recommend reading the whole letter to see the arguments against further cuts to welfare, and how the Right is wrong on welfare and beneficiaries.  However, as a warning for society, part of her comment on issue 8 is this:

The ‘welfare cuts’ policies led to the rise of preventable diseases like rheumatic fever, pneumonia, bronchiectasis, and serious skin infection which resulted in expensive hospitalisations, and for some children in permanent disability. The meningococcal epidemic, fuelled by household crowding, caused many deaths and lifelong damage and had to be controlled by a costly immunisation programme.  The health status of our children for preventable diseases remains poorer than pre-1990’s levels. The long term costs of medical care and disabilities (all preventable) are likely to have outweighed any savings from the welfare cuts. 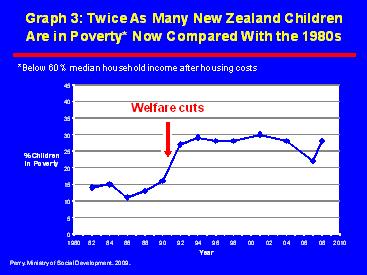