Farrar vs the facts

I’ve never quite understood why David Farrar, who is after all paid to do statistical work, insists on performing transparent statistical tricks on his blog.

Yesterday, he did a post with figures on the number of 15-19 year olds with jobs. He argued that it showed removing the youth rate and giving everyone the same minimum wage was the cause of many young people losing their jobs. No evidence was presented for this ideologically based argument other than that the youth rate was (essentially) abolished in March last year and youth employment is down since then.

I wonder what else could have caused lots of young people to lose their jobs… oh yeah, how about the worst recession in 30 plus years?

I took the same data as Farrar used but rather than conveniently starting 1999, I went back to 1990 so we could see what happened in other recessions (and,unlike Farrar, I used the percent with jobs, not the absolute number for obvious reasons). Here’s what I found 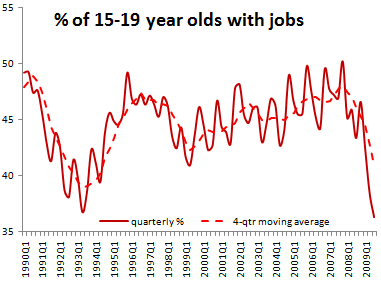 Check out what happened during the recession induced by the neoliberal revolution in the early 90s. Yup, lots of youths lost their jobs. There’s a smaller dip in the Asian Crisis recession too. And now a dramatic drop – not when youth rates were abolished but a year later at the worst of the recession.

36 comments on “Farrar vs the facts ”