Folau’s rights to free speech are not being attacked 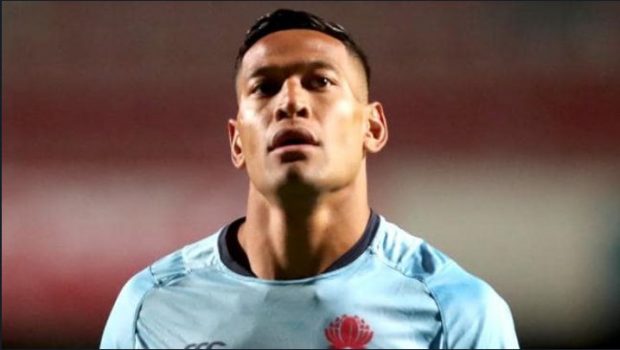 Israel Folau is a Tongan born professional Rugby/League player of some standing.

He is also a devout christian.

Too devout for my tastes.  I am an Irish Catholic still struggling to deal with the demons this has caused to me.  And I understand his commitment to his religion.  But I think that Israel’s views are too extreme.

I am really happy that he has earned so much money as a professional Rugby player.  He is really good.  He is a member of the Pacifica wave that has dominated Rugby and League recently.

The Australian Rugby Union has some contractual obligations, one of them is that he should not behave in a way that brings the game into disrepute.

Most people think that he did when he sent messages via social media that homosexuals were sinners and hell awaits them.  This was not the first time he has done this.  Despite requests he refused to take the post down.

The matter has developed into a culture war with different attempts to gain funding for legal action being rather successful.

And people are trying to say that the matter involves freedom of speech and freedom of religion.  Tim Soutphommasane in the Sydney Morning Herald has the perfect response, that the claim is codswallop.

Consider the alternative: if we were able to claim freedom of religion as a trump card, what would that mean? Would it mean we’re entitled to break the law or to void contractual agreements by claiming we have a right to exercise our religious beliefs? Or that organisations aren’t free to dissociate themselves from an employee or charge whose conduct is inconsistent with their values?

In any case, it simply isn’t true that Folau’s religious freedoms have been fundamentally encroached. Folau can still say what he likes about homosexuals and sinners. It’s just that saying that may come with consequences. That’s not free speech being unjustly restrained. That’s Folau choosing his religious conviction over his contractual obligations. A choice he is free to make. It’s hard to see how Folau is a victim.

It would be a strange result if you can breach an employment by, for instance, not turning up to work every Friday, but be exonerated by stating that it is because of your religious beliefs.  Or to claim that you should be shielded from consequence for swearing at your boss because you were exercising your right to free speech.

And it is a bit strange for a very wealthy person receiving donations from Christians so that he can continue his anti homosexual crusade.

Folau is not a standard bearer for free speech and protection of religion.  He is just a very naughty boy.