According to Bill English’s text message to electorate chair Stuart Davie on 21st February 2016, Glenys Dickson was given an extra payout from the Leader’s fund “to avoid potential legal action.” Besides English all parties knew at the time that the legal issue involved an unauthorised recording of Dickson’s conversations by Todd Barclay MP, potentially an offence against the Crimes Act.

As of today Bill English is insisting that Dickson’s payout was as a result of an employment dispute, and that in February no-one understood that there was any question of illegality involved. His exact words to John Campbell were: “While now there is an understanding that there was a potential offence, at the time that was not the case.” The text message gives the lie to that. Watch this and judge for yourself.

Parliamentary Services would only have authorised a standard payment for settlement of an employment dispute. But the Leader’s fund is discretionary, at the control of the Leader of the National Party’s office and not subject to any oversight once granted. It was the only source available for an extra payout in consideration for a condition of confidentiality “to avoid potential legal action.”  John Key would have known about the issue in February, Bill English by his own admission knew about it in February, Wayne Eagleson would have had to have authorised the payment. No wonder Bill English told the electorate chairman “everyone unhappy.”

All these points were covered in the original Newsroom story by Melanie Reid.

Winston Peters is right, Bill English should resign. Stuart Davie did. As he said “with what I knew, if these matters came out down the line, people would say what did you do? If I did nothing, I would be as complicit as Todd.” 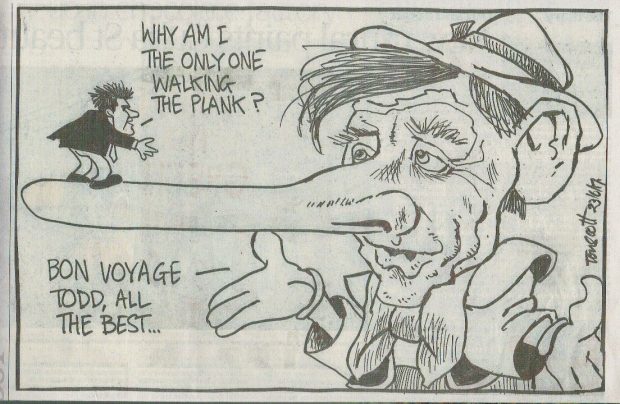