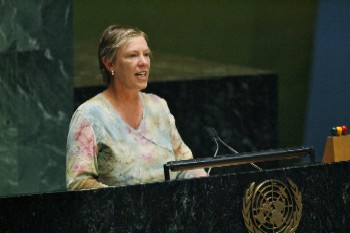 She is one of the less noticeable of the current list of Labour MPs.  She has been in Parliament for a long time, has given sterling service, has kept the Port Hills electorate safely red and has served the Labour Party organisation at the highest level, especially in its darkest time when she was President in the late 1980s.  She should be acknowledged.  So this post is to thank Ruth Dyson for her commitment to and services for the Labour Party.

She has been active in the Labour Party since 1979.  She became Party President in 1988 and was part of the rearguard action that dulled and eventually defeated the Rogernomes by making sure that progressive candidates were selected in winnable seats.  This aspect of Labour’s history needs to be delved into further.  She deserves our thanks.

She became an MP in 1993 during an especially difficult time and stuck it out and kept going.  She beat David Carter to win the seat on the first occasion.

She was a very capable Minister in the Fifth Labour Government but had a rough time after she was caught driving with excess breath alcohol.  She was returned as a Minister however,

She was formidable as a local MP.  I have seen many, many constituents say good things about her and I cannot think of anyone saying a bad thing about her.  This is the measure of the quality of an MP.  What do their constituents think of them.  Most of Ruth’s constituents thought she was great.

Thank you Ruth for your commitment, and your humour and your style.  Go well.

Got to agree with this- even as a Wellingtonian, I've never heard a bad thing about Ruth Dyson. I worked at EQC, and while you often knew if she'd contacted us about a claim it might be a difficult, she would invariably know exactly what's what about it. She's a good egg. https://t.co/Lo7fOVknrT