Greenland holds a large store of fresh water. If fully melted, it will raise sea levels by roughly 7 metres. It is melting – fast. Last week, temperatures across Greenland about 22 degrees Celsius warmer than the normal for that time of year. It produced an extraordinary visual effect of dogs walking on water through surface melt over sea ice. 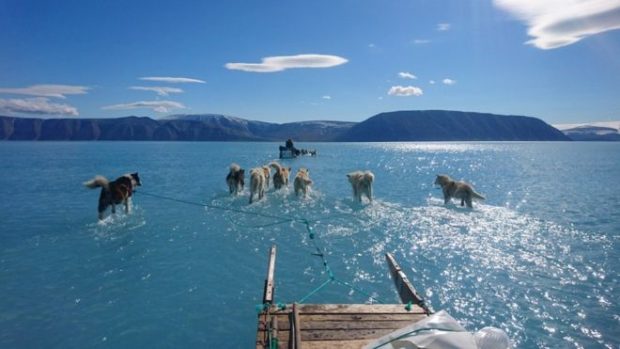 With their sled in tow, a pack of dogs trudge towards a distant mountain range in north-west Greenland across surface melt water.

Mr Olsen and his team were retrieving equipment from a weather station in the Inglefield Fjord area. As they walked across the 1.2m (4ft) thick sea ice, water pooled on the surface.

Because the sea ice is compact with almost no cracks, the image gives the impression the dogs are walking on water, Martin Stendel, senior researcher at the institute, told the BBC.

About half of Greenland had exceptional levels of surface melting last week, including over much of the thick glaciers. It was caused by a high pressure zone locking over Greenland creating warm sunny weather with little cloud. This has been an ongoing issue in the northern hemisphere in recent decades as the northern vortex jet stream pushes weather into unfamiliar patterns. It has pushed extreme cold further south or held hot air sitting in position over the US/ Canada and Russia. Further north, the cold air moving south causes melts.

That relatively warm (compared to ice) water goes somewhere – usually downwards under the glaciers. It raises the temperatures of the ice it is comes in contact with and ‘rots’ it. It makes it harder to refreeze into solid protective masses and means that next summer, the melt will accelerate even at less exceptional melting.

Just how very large sheet glaciers melt in Greenland (or anywhere else) isn’t that well understood. Efforts like the cyroegg sensors being inserted under the Greenland glaciers may help. However it isn’t hard to look at the available evidence and see that the IPCC projections are likely to be low.

For instance, that rain is becoming more frequent to fall in winter in Greenland. Now that just makes me shudder because the heat transfer into melting ice will accelerate into a year round experience. It isn’t quite as bad as having increased amount of snow falling in dry frozen desert of the East Antarctica ice sheet. But it is still pretty scary when you look at the climatic feed backs such changes make in accelerating the melt.

However just drowning coastal cities worldwide is the least of the issues. Personally I have no sympathy for people who invest in coastal property after the last 40 years of increasing evidence of human created climate change. People can just move and lose their bad investments as coastal dunes erode, sewer systems backup and the subways flood.

But the loss of that cooling block of ice in the northern hemisphere will change the balance of the working climate in the north. There is a lot of global food supply in the north susceptible to the movement of the jet streams. A combination of  colder weather moving southwards more rapidly punctuated by hotter summers, as it jams the atmospheric mixing systems, is going to play havoc with food production.

82 comments on “Greenland is melting – faster ”