It was interesting to see that Bill English has distanced himself from Collins, and made it clear both that he would not countenance that behaviour and also that it was Key’s decision and responsibility.

English was pretty scathing about Collins in the Hollow Men as well. In a letter to Brash (page 146) he discussed two presentations that Collins made to the caucus, one on health policy and one on family.

“I thought the health presentation at caucus was awful,” he wrote, “and I am told Judith’s family presentation was worse. I am not one the caucus complains to, except for today, so it must have been pretty bad.”There are a few lessons here,” he said. Brash’s strategy team had been “pushing Judith Collins as a star’ but she was a second year MP ‘pushed beyond her capacity into a hard portfolio’ and ‘with an unfortunately high estimation of her won competence.” Collins, ‘with apparent backing from the top’ had ‘spent too much time cultivating the media herself and believing the resultant publicity. She will find it hard to recover her credibility in caucus where she has been  a tough critic of her colleagues behind the scenes and they know it.”

I’d say at the moment her credibility in caucus, and the country,  is well below zero. The way things are going, John Key’s is heading there too. Particularly since Key and Collins both say Collins didn’t give Slater Simon Pleasants’ name 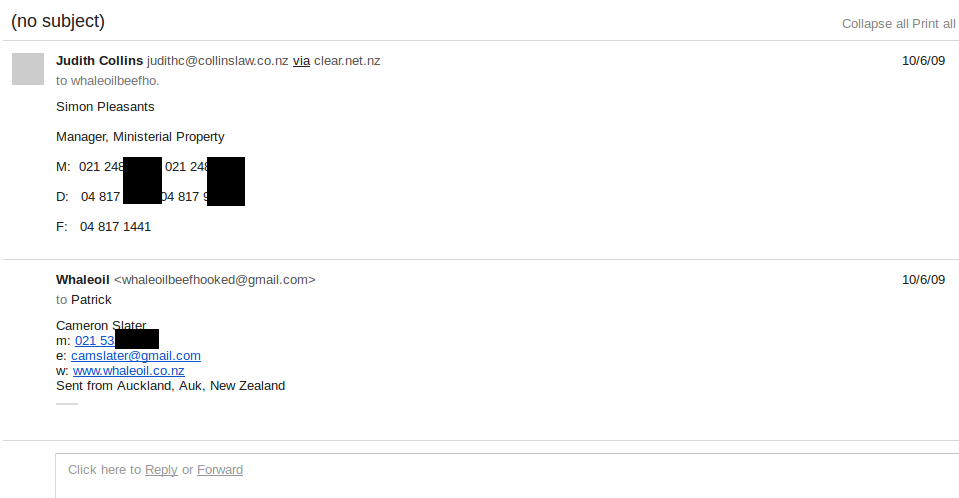