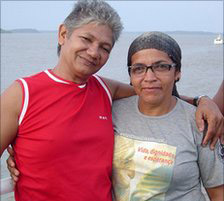 José Cláudio Ribeiro da Silva and Maria do Espírito Santo are heroes. Like Chico Mendes before them, they have paid for their activism with their lives:

Six months after predicting his own murder, a leading rainforest defender has reportedly been gunned down in the Brazilian Amazon. José Cláudio Ribeiro da Silva and his wife, Maria do Espírito Santo, are said to have been killed in an ambush near their home in Nova Ipixuna, in Pará state, about 37 miles from Marabá.

According to a local newspaper, Diário do Pará, the couple had not had police protection despite getting frequent death threats because of their battle against illegal loggers and ranchers. …

In a speech at a TEDx event in Manaus, in November, Da Silva spoke of his fears that loggers would try to silence him. “I could be here today talking to you and in one month you will get the news that I disappeared. I will protect the forest at all costs. That is why I could get a bullet in my head at any moment … because I denounce the loggers and charcoal producers, and that is why they think I cannot exist. [People] ask me, ‘are you afraid?’ Yes, I’m a human being, of course I am afraid. But my fear does not silence me. As long as I have the strength to walk I will denounce all of those who damage the forest.”

The courage of people like Da Silva and Santo is humbling. Take a moment today to remember two heros.

Sometimes the world makes me angrier than I can possibly describe.