Written By: mickysavage - Date published: 9:35 am, February 15th, 2017 - 35 comments
Categories: International, the praiseworthy and the pitiful, us politics, you couldn't make this shit up - Tags: donald trump, hypocrisy, michael flynn 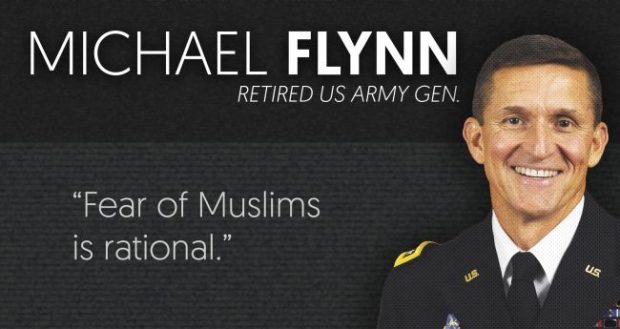 Over in the United States of Trumpsville National Security Advisor to the Trump White House Mike Flynn has resigned.

The reason? He was not entirely honest to VP Mike Penn when talking about what he talked about in a discussion with the Russian Ambassador pre inauguration. The implication is that he talked favourably about lifting the Obama imposed sanctions against Russia but then denied it.

The worry is that he created a situation where he was totally compromised and had potentially opened himself up to blackmail.

The issue says lots about Trump’s judgment and Flynn’s stupidity. As said by Frank Bruni;

If you’re a bedraggled sixth-grader from a beleaguered country where the Quran is a popular text, he will stop you at our border. If you’re a retired lieutenant general who hallucinates an Islamic terrorist behind every last garden shrub in America, he will welcome you to the White House.

But the outstanding feature of this is Flynn’s hypocrisy. Watch this speech that he made to Republican delegates and marvel at the lengths he goes to advocate the locking up of Hillary Clinton for supposed security violations. The careless use of a private email server is nothing compared to what Flynn has done.