If these trends continue… A-y-y-y!

Here’s the trend for the past six months of Roy Morgans projected to the next election.

I made this graph, not to piss Righties off with its obvious outrageous-ness (OK, not just to piss Righties off) or even to point out how steep National’s current rate of descent and the Left’s ascent is, but to make a point: the continuation of the current trend is obviously not realistic. Therefore, at some point the tide will stop ebbing for National. There’s even a chance it could start rising again.

It would be foolish to think that the Left has 2014 wrapped up. Labour just got the tar kicked out of it. It’s weaker as a result in ways that are only just starting to manifest. Such as their inability to get timely press releases out. Key is still 4.5 times more preferred for PM than the alternative. That will matter when people decide who to vote for, or if they’ll just stay home. 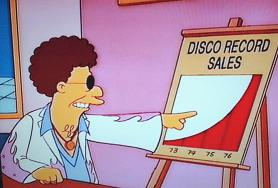 Party support moves in waves. The skill of politics is to make the crests higher. The troughs shallower. My concern is that the absentee leader of the opposition is pulling a Disco Stu –

If these trends continue… AAY!”