John Key was characterised by some of his fellow money-men as “good antennae, no compass”, and he does seem to have a good gut instinct for (usually) saying what the average Kiwi wants to hear.  But sometimes going with your feelings isn’t enough.  Sometimes reality needs to intervene.

His willingness to go with his gut rather than evidence has been seen a lot recently.  And it will send our country down the wrong path.

My first recent egregious example was on Hard Talk:

Sackur: But he is very well qualified, isn’t he? He’s looked, for example, at the number of species threatened with extinction in New Zealand, he’s looked at the fact that half your lakes, 90% of your lowland rivers, are now classed as polluted.

Key: Look, I’d hate to get into a flaming row with one of our academics, but he’s offering his view. […]

Sackur: Yeah but he’s a scientist, it’s based on research, it’s not an opinion he’s plucked from the air.

Key: He’s one academic, and like lawyers, I can provide you with another one that will give you a counterview.

Key fails to understand the difference between a scientist whose job it is to gather evidence and weigh up the truth, and a lawyer whose job it is to present the best case for whichever side they are paid by.  He follows up his casual dismissal of science with New Zealand being “relatively 100% pure”.  He has also failed Mike Joy’s challenge to come up with another scientist with “a counterview”.

Whilst it is popular to dismiss economics as ‘the dismal science’, John Key has put a lot of trust in Treasury’s high GDP, job and wage growth forecasts, so certainly acts as though he believes them.  But when departing Treasury head John Whitehead stated in his final report and Q&A interview the measurable fact that New Zealand was the 7th least equal in the developed world (and that we need to do something about it), we got:

Key: Are we deeply unequal? I’m not sure that’s right. I haven’t had a really good look, apples with apples comparison. If you take New Zealand’s welfare system for starters, which we’ve just been discussing, that’s universally regarded as a more generous scheme than in many other countries. So at one end of the scale you could say New Zealand is arguably providing more support for a lot of people.

Once again he’s “not sure that’s right” trumps actual evidence.  And instead he comes up with an opinion that our welfare system is “universally regarded as … more generous” – even though it is significantly less generous than almost all of western and northern Europe or even Australia.

As another recent example yesterday the youth working group Key set up with  his science advisor Sir Peter Gluckman reported back.  It cited evidence that some schemes had limited effectiveness in reducing poor youth outcomes, or were even found to be harmful – including boot camps and military-style training and ‘Scared Straight’ programmes, where troubled youths meet convicts who attempt to scare them away from a life of crime.

Sir Peter: Our research suggests that many programmes have been introduced, albeit with good intent, that are unlikely to succeed as they are not supported by the evidence base, whereas other approaches likely to be effective have not been implemented.

John Key though knows Boot Camps are working – even if the evidence says otherwise:

Key: we can see with our own eyes that they work… The results speak for themselves.

Also released yesterday was the ECE working group’s report.  It calls for limits on how few trained teachers can be employed, starting at 50% and rising to 80%, with the re-introduction of incentives to have 100% qualified teachers.  All this with plenty of evidence that qualified teachers are important to young children’s success and Sir Peter Gluckman saying how important those early years are – by adolescence it’s all too late…

I’m wondering what Key’s response will be, and in which direction he will lead our country…

I have been meaning to post about Steven Joyce’s report into the economics of the Auckland Central Rail Loop.  Auckland Trains cover it very well.  The NZTA report would seem as car-biased and government-influenced as most NZTA reports, and the list of international experts backing Auckland Council’s much less pessimistic report certainly reads much more impressively.  Greg Presland at Future West points out that even the Auckland Council report fails to take into account Peak Oil, something that occurred in 2006 according to the IEA – and they should know.  We’ll see how $4/litre fuel affects 2041 car use projections…

Still, at least Joyce has the grace to make some evidence up to support his case, rather than saying he just knows Public Transport doesn’t work… 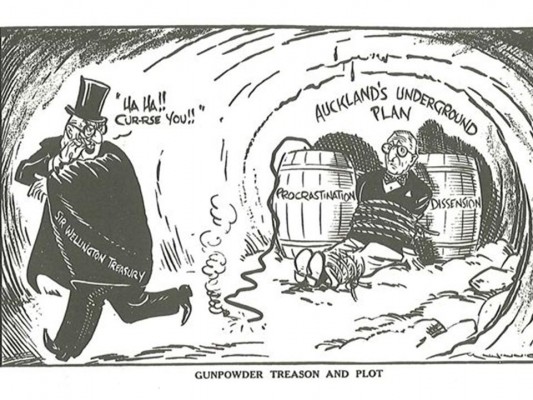