John Key: These are my principles …

… and if you don’t like them, I have others.

After yesterday’s shock announcement of a November 26 election date, Mr Key said there was no place for Mr Peters or his party in any future government he might lead.

“I don’t see a place for a Winston Peters-led New Zealand First in a government that I lead,” he said.

“Historically, he has always been sacked by prime ministers. It’s a very different style to mine and it’s rearward-looking.

“I’m about tomorrow, I’m not about yesterday.”

Prime Minister John Key has given his strongest hint yet he will swallow the equivalent of a political dead rat by the name of Winston Peters.

Mr Key says National supporters want him to do a U-turn on previous promises and work with Mr Peters, if it means stopping a Labour-Greens government, and a 3 News/Reid research poll backs this up.

Mr Key is talking like he never has before, because dealing with Mr Peters in order to take power used to be a “no” from Mr Key.

“I think partly it reflects that the country doesn’t want to see Labour and the Greens in office,” says Mr Key, “and so if it means having to deal with New Zealand First, a lot of our supporters would prefer to see that situation.”

“[Mr Key] once said that he would never work with Winston Peters because he couldn’t trust him,” says Labour Party leader David Shearer. “[He said] it was a matter of principle, and not political expediency. This man has no principles.”

“It clearly shows that principle can be washed away if the Prime Minister wants to get a third term in power,” says Green Party co-leader Russel Norman.

It also has a 2011 clip of Key saying part of that reported above by the BOP Times. 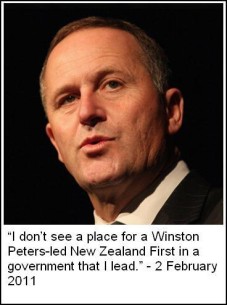 The 3 News video also has a clip of Peters playing hard to get, and refusing to talk about the possibility of working with National. And meanwhile Gower does his usual straight-faced manipulative promo of 3 News own poll on the Peters-Key coalition possibility.

Gower gives a positive spin to Key’s slippery principles, by talking up how Key is just considering doing what the polls, and thus (allegedly) what most Kiwis want.