Post John Key all National ever had going for it was an undeserved reputation for financial competence. Now that is gone too. It doesn’t get any worse than this 3 weeks out from an election. 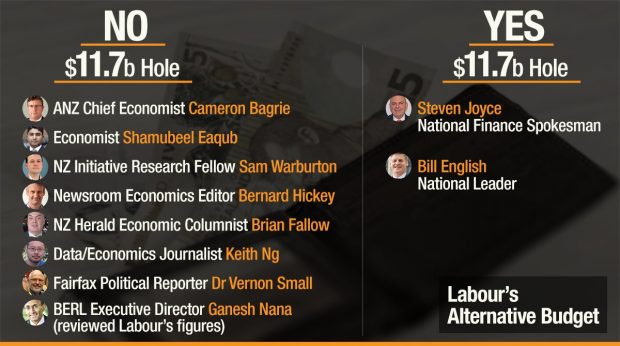 Politically Correct: The deadly serious numbers game
…
National’s so-called bombshell about Labour’s “$11.7 billion fiscal hole” has turned into a big fiscal joke with absolutely everyone in agreement that the hole does not exist.
…
National’s claim that Labour forgot to pay for $11.7b worth of stuff is just plain wrong. You will remember that Finance Minister Steven Joyce called a press conference on Monday to fact shame Labour over its shoddy accounting. But now the expert verdicts are in it’s Joyce who’s got egg on his face.

National Party finance spokesman Steven Joyce’s claim yesterday that Labour’s spending plan has a $11.7 billion hole in it has been dismissed by a number of New Zealand’s top economists.

National campaign manager Steven Joyce is doubling down on his attack on Labour’s alternative budget, despite a series of economists saying he’s wrong.
…
But experts said today National had made an error and did not read Labour’s policy properly.

The New Zealand Initiative – a libertarian think tank – said National appeared to have made a basic accounting error in its criticism.

Research fellow Sam Warburton said it looked like Mr Joyce had zeroed in on one line in Labour’s plan and ignored 16 other lines.

“When you take one part of the equation and don’t include the other part … you’re going to get the wrong answer.

Desperate and dangerous times on the campaign trail

…Finance Minister Steven Joyce made the big bald statement that Labour had made an $11.7 billion dollar blunder with its spending promises.

Except it hasn’t. The $11.7 billion claim has quickly unravelled as a string of economists and financial commentators said Joyce got it wrong.

By the time a frazzled media pack had time to pick apart Joyce’s numbers, however, some of the mud is bound to have stuck.

So Is this our post-truth politics moment? Or was Joyce being disingenuous? Or was it just the usual election campaign spin?
…
And National is something it wasn’t a month ago – and that’s desperate.Till now, it’s ministers had never seriously contemplated losing the power and perks of office.

Economist consensus – there’s no $11.7b hole in Labour’s budget
…
Here’s what the economists say:

Dr Ganesh Nana, BERL Executive Director, says the numbers make sense and the “alleged hole is a fiction arising from a disagreement over definitions”.

“There’s no hole. But they don’t have a lot of money to play with in the 2019 and 2020 budgets. They’ve basically computed up front to what they are going to do for three years. That’s fine but the wheels of government still need to turn and be funded.”

“There is no hole in Labour’s fiscal plan. It’s just a political argument about cost inflation and spending priorities.”

Former NZIER economist Shamubeel Eaqub: There isn’t an $11.7b hole from what I can see.”

Keith Ng, Public Address/Spinoff economics and data journalist: “There is no missing money. The money is accounted for. I suspect there’s some shenanigans around why Labour did it this way (to make the health/education/etc lines look bigger, basically), but it’s literally a question of whether you put the numbers on row 239 or row 228 in the spreadsheet.”

“National appears to have looked at one line (the “operating allowance”) in Labour’s budget without looking at the other 16 lines in the Budget. If they had, they would have seen extra money has been allocated to those lines such as Health, Education, Social Welfare and Housing.

“It looks like National’s mistake came from only looking at the operating allowance and expecting to see a greater amount of flexibility for future expenditure, eg inflation. Labour has effectively said ‘we’ll book in some of that future expenditure now’. Whether providing that certainty to Health and Education now is best or keeping things more flexible in case of unknown future demand or events is best is a judgement call. But there is no $12 billion hole.”

“What we have here is a small unallocated spending pot and poor word choice by Labour and a huge over-reach for a political hit by National”.

“In terms of the argument, Robertson is right, and Joyce is wrong. […]The money isn’t missing”, he said on RNZ.

Cynical and desperate from Joyce. A lie by campaign committee design. Public apology – so what can we believe from here? @TheAMShowNZ

Even the NZ Initiative now slapping down Joyce for $11b lie. Hard to see how he recovers his reputation after this.https://t.co/BNkWzQjheU pic.twitter.com/roKKyNkp46

Time for National to have its fiscal plan independently checked. Joyce is fast losing cred.