There’s a post up on Whaleoil detailing the health status of Cameron Slater.

In short, he’s had a stroke and is pretty buggered.

The rumours have been going around since late last year and it turns out he had two medical events in October, one of them particularly debilitating.

The WO post records that Slater is fighting back, though he is unable to concentrate for long periods and has paralysis in one arm.

Obviously, he’s not contributing to WO, though his minions keep on plugging.

The Whale Oil post also ends with a plea for financial help to cover legal bills bought on “as a result of having to defend himself from the lawfare of his enemies.”

I have a sneaking suspicion that Cam’s “enemies” include The Standard in some form or other. It should also be noted that his legal problems are mostly of his own making.

Having said that, I wish Cameron Slater all the best in his recovery. It’s a terrible thing to happen to anyone, let alone someone as relatively young as him.

For right and/or wrong, the Whale Oil blog has played a significant part in  the political discourse in NZ. It may have represented all that was nasty about the NZ right, but it’d be churlish not feel some sympathy for it’s founder when he’s down on his luck.

However, karma gets a mention in this post’s title, because if there really is a balancing in this world, Cameron Slater has just his chakras realigned in a cosmically brutal way.

Given his many years of sneering at the weakest in our society it’s hard not to wonder if the penny has dropped for him.

At the very least, I hope he reflects on the public health system that saved his life, the taxpayer funded benefits he’ll no doubt be accessing as he recuperates, and the charity he now needs that he despised when it was given to others.

What goes around, comes around. 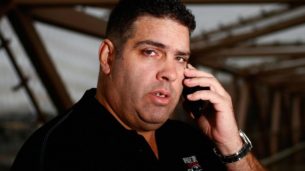 Slater, back in the days when John Key took his calls.

If you are minded to help Cam’s bills get paid, the details are below: