Imagine, if you will, taking your children down to the park to find an overseas’ owned company had set up a dairy farm in one corner. Over time the shit builds up and flows onto the play ground. You complain, but are told the farm is under no obligation to treat or retain their waste and the council has no powers to do anything about the mess. You wonder why this was allowed to happen.

This is not fiction, it’s what’s going on right now in the Marlborough Sounds. Anyone can apply to the EPA to set up a salmon farm, and pollute the surrounding water for free, paying no rent or rates. Unbelievable but true!

Last term National set up the EPA, basically because sacking local councils like Environment Canterbury to free up water rights for their farmer mates was not a big vote winner.

The name of the agency is just marketing spin. It is able to do by stealth what National did with Environment Canterbury – override your district plan without having to sack the council ‘Environmental Undemocratic Destruction Agency’ would be a more accurate name.

National’s EPA isn’t concerned with protecting the environment – in fact it’s not even been given the task or the responsibility to protect the environment. It’s just a rubber stamping authority chaired by another National party lacky, Kerry Prendergast, who was a candidate for National in a not too distant general election.

King Salmon, a majority-owned overseas company, is applying to the EPA to create nine new salmon farms in the Sounds. Under the present district plan this would be impossible, because eight of the company’s proposed new farms were in a zone where the plan stated marine farming was prohibited,but the EPA can override that restriction. If their application is approved we will see a flood of other applications.

Farming fish has been with us for thousands of years, but not in this manner. In the past we farmed fish that eat vegetable matter, such as carp or tilapia. For thousands of years Chinese fish farms have cycled waste from vegetable crops through their fish and then used the waste from the fish to fertilize the next vegetable crop. This is a sustainable closed loop system that creates protein, sustainable systems don’t have waste, only by-products. 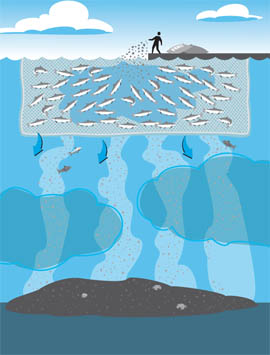 Salmon farming is like farming tigers; approximately a third to half of the global fish catch goes to feeding these salmon, they need somewhere between 3 to 5kg of food to gain 1kg of weight. And all that food that doesn’t end up as salmon ends up waste that poisons the local ecosystem.

“Any industry which is reliant upon a fast-diminishing fisheries resource to fuel its own expansion and which discharges untreated contaminated wastes directly into the sea affecting other coastal users is hardly sustainable. And the potentially fatal sting in the tail is that farmed salmon contains high levels of contaminants such as dioxins and PCBs (Jacobs: 2000, Wigan: 2001, Easton: 2002). In so many ways, the phrase, ‘sustainable salmon farming’ like so-called ‘organically farmed salmon’, is an oxymoron (Staniford: 2001c).”

This industry is totally unsustainable. It’s sucking the blood out of our ecosystems, polluting our environment and stealing our public space. The current government seems hell bent on selling our country to overseas companies and walking all over local communities while handing out free passes to pollute and destroy our environment we should stand up and fight.

Here are a couple of organizations that are fighting to save the Marlborough sounds for future generations, they need all the help they can get.
http://www.guardiansofthesounds.co.nz/
http://www.sustainoursounds.org.nz/