Update: As of 11am not a single story on Mt Roskill appears on the online front pages of either The Herald or Stuff. What a surprise!

The Mt Roskill by election was a huge win for Michael Wood, for Andrew Little, and for Labour. Here’s some of the media reaction. Audrey Young is particularly forthright: 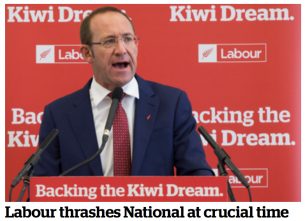 The Labour leader has described the win as “a bloody nose for National”. It is more like a bloody nose, a black eye and broken jaw.

National was comprehensively thrashed in a fight that had the potential to run closer, given that National polled 2189 votes higher than Labour in the party vote two years ago.

John Key campaigned just as hard, if not harder in the electorate, because an upset result would have destabilised Little’s leadership at a critical time in the election cycle.

Key campaigned for seven days in the electorate, between earthquake management and international sumiteering in Peru. Andrew Little was there for six days.

Credible polling still puts Labour in with a chance in a centre-left bloc to lead the next Government but there has been nothing in Little repertoire until now that says “winner”.

An important point which much of the “opinion” pile-on on the last week or so has conveniently ignored.

Other coverage – catch it before it disappears from front pages (you’re already too late, of course):

Just in passing, credit to the only journalist who called it in advance, The Spinoff’s Simon Wilson:
NZ’s feeblest John Key parrot is on the brink of a shellacking in Mt Roskill

Disconnect between the last week's media coverage and tonight's result in Roskill should be cause for serious reflection in commentariat.