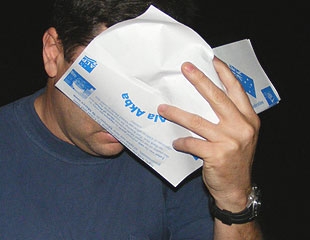 The husband of retiring Liberal MP Jackie Kelly and a state Liberal official have been caught distributing fake pamphlets in Western Sydney. The bogus pamphlets purport to come from a militant Islamic group – praising the ALP’s supposed support for the Bali bombers.

The pamphlets have been referred to the Australian Electoral Commission by the ALP. The Liberals’ State Director denied Liberal Party “knowledge or authorisation” of the pamphlets.

These are almost exactly the same words used by National Party General Manager Steven Joyce to deny National Party involvement in the Exclusive Brethren pamphlets distributed in the closing stages of the 2005 election in New Zealand.