It’s a bit late, but a reader who was at yesterday’s anti-EFB march has mailed us through some pics from the rally. As David Farrar has noted, the protest march was joined by a small group of activists in John Key and Mr Burns masks chanting things like “What is it that we support? John Key’s election rort!”, “Elections, money, power, cash – Bring back Don Brash!” and my favourite, “2, 4, 6, 11 – We support the Exclusive Brethren!”. Their goal was to expose the real motivations of the bill’s opponents – that is, safeguarding the National Party’s dirty money – and to do so with humour. Judging by the media coverage they pulled it off. As expected, ten counterprotesters in the midst of a hundred or so angry Tories were always going to be abused and attacked. Here’s one anti-EFB protester who didn’t seem to have much of an appetite for free speech: 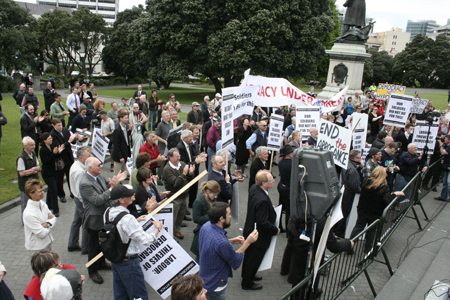