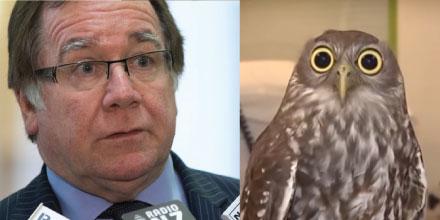 What started as a trickle is now becoming a torrent of resignations as Murray McCully has also announced that he will be leaving politics at the next election.

He announced earlier this year that he would no longer seek the East Coast Bays nomination and would only stay if he remained Minister of Foreign affairs.  Looks like he has learned the bad news that this is not going to happen.

He was an unusual politician.  Matthew Hooten famously said of him that if he could find a way to run a sausage sizzle for local hospice corruptly he would do so.

Recent examples of his unusual behaviour included the promise to build a sheep station in the middle of the Saudi desert in an attempt to persuade a private individual to encourage the Saudi government to sign a trade deal.  Shonky is the only word that can be used to describe the arrangement.  The Government celebrated a finding that what occurred did not fall within the definition of corruption using a narrow legal interpretation of the word.  What low standards this Government has.

There was also the granting of a contract to run a resort on Niue to a National Party donor who had previously written a cheque for $101,000 made out to the party.  Of course there was nothing to see here and nothing untoward.  At all.

And as a further example of his ineptitude the gutting of MFAT under his watch caused it to drop the ball and allow a Malaysian citizen to leave the country using a diplomatic passport even though he was facing charges.

He was known as the dark prince of National’s caucus and someone who should not be crossed.  Time will tell if he decides to respond to the news in his usual manner.

26 comments on “McCully is going ”