The Great Depression was marked by the rise of rightwing reactionarism. Out of reactionary movements came fascist governments from Brazil to Romania. We even had the New Zealand Legion, which claimed 100,000 members. Now, the Great Recession is spawning a new wave of militant reactionarism, and it’s coming to our shores.

The Tea Party, which reached a new level of violence this weekend, is the most well-known example of reactionarism on the rise but it is hardly limited to the US. The British National Party has won its first seat in the European Parliament and won over half a million votes in the UK general election year. Mussolini’s granddaughter, Alessandra, is also an MEP.

Economic crisis hits the poor the hardest and they can respond in two ways – with class consciousness and a united demand for left-wing solutions or with reactionarism, a pining for the ‘good old days’ that can be restored by strong leadership and protecting the ‘nation’ from, usually, new ‘outsiders’ who are blamed for taking the wealth and sapping that nation’s morals.

25 years of neoliberalism has weakened the collective values that the Left needs to thrive and left the working class atomised and angry. We have a long period of economic crisis ahead of us. The rise of reactionarism, rapidly becoming more violent, and, if allowed, evolving into fascism will be the major political consequence. Unless the Left provides an alternative, reactionarism will turn working class people against each other – ‘native’ vs ‘immigrant’, straight vs gay, male vs female – and that ultimately just makes it easier for the ruling capitalist class and more difficult for the Left.

Here in New Zealand a new group calling itself the ‘New Zealand Right Wing Resistance’ has launched in (where else?) Christchurch. This flyer is being distributed: 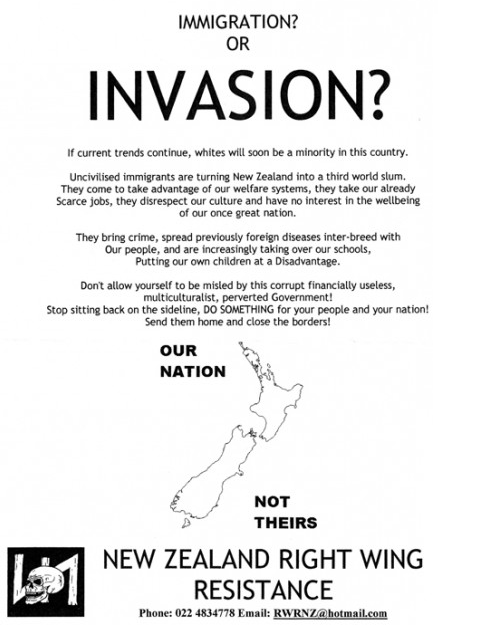 The name is enough to tell you this is a reactionary movement, perhaps it’s Kyle Chapman’s latest project. The nationalist language and insignia (Wolfsangel rune used by neo-Nazis and SS-style skull) points to violent intent – even if just as a fantasy. The fact that the abbreviation of the name in the email address doesn’t match the order of the words written just above it suggests they’re not too smart.

But reactionaries never are smart. What they are is militant, populist, and attractive to young, unemployed (men) who have seen their promised future disappear and are receptive when told that ‘outsiders’ are to blame.

Right now, Christchurch is the perfect breeding ground for a reactionary movement. The economy is tanking, the government (to the reactionary’s mind) is leaving working-class Pakeha in quake-damaged homes while handing over the beaches to the Maori, and there’s a long history of anti-Asian bigotry in the city to build on.

Will this movement take off? I hope not. But we need to be on our guard. And the Left (especially Labour) needs to offer those unemployed working-class kids something better than the reactionaries – a real alternative economic, and hope.