While the digestive system is working overtime, I can write another short light post inspired by recent comments on The Standard.

I am no fan of MMP. Sure, it is heaps better than some of the other systems such as in the US and UK. But it still has a few downsides that could be addressed relatively easily in my non-expert view and some still find it too hard, it seems.

As far as I know, our MMP system has been modelled on the German system with the aim to have a more representative one that reduced the influence of a majority party and the two-party dominance by National and Labour.

Indeed, ever since the first MMP election in 1996, no single party has achieved a parliamentary majority. Arguably, though, it still is largely a two-horse race between National and Labour.

Would we or should we expect this to change and be any different by now? Germany is a federal state but even so, it is interesting to see how diverse their national parliament (der Bundestag) is in terms of political parties. I would argue that the German situation is many way ways remarkably similar to New Zealand’s one.

Germany also seems to have a rather high threshold of 5% of the national party vote, which resulted in only seven parties represented currently (currently five in NZ Parliament).

For comparison, Denmark has a threshold of 2% and has currently 10 parties represented in their parliament (Folketinget), and this picture has not changed much over time.

The Danish voting system is different from ours in that it is open-list proportional representation.

Open list describes any variant of party-list proportional representation where voters have at least some influence on the order in which a party’s candidates are elected. This is as opposed to closed list, which allows only active members, party officials, or consultants to determine the order of its candidates and gives the general voter no influence at all on the position of the candidates placed on the party list. Additionally, an open list system allows voters to select individuals rather than parties. Different systems give voter different amounts of influence. Voter’s choice is usually called preference vote.

There are a few other quirks of the Danish system I was not aware of. For example,

Gaining representation in parliament requires only 2% of the vote. With such a low election threshold, a large number of parties are represented in the chamber, making it all but impossible for one party to win the 90 seats necessary for a majority. No party has achieved this since 1901.[my emphasis]

The following is also interesting, and although I cannot see it happen any time soon in NZ, it doesn’t seem to have harmed Denmark:

All Danish governments since then [1901] have been coalitions or one-party minority governments. For this reason, a long-standing provision in the constitution allows a government to take office without getting a vote of confidence and stay in office as long as it does not lose a vote of no confidence. One consequence is that, unlike in most other parliamentary systems, a Danish government can never be sure its legislative agenda will pass, and it must assemble a majority for each individual piece of legislation.

The constitution does not mention political parties at all, although the electoral act does, and MPs are almost always elected for a party. The only independent who has been elected in modern times is the comedian Jacob Haugaard, but independents, usually unknown ones, are seen at every election. Requirements for standing as an independent candidate are much more lenient than for a new party (signatures from 150 eligible voters), but independents are only allowed to contest in a single district, making it very difficult to gain the needed number of votes for a seat. [my emphasis]

Lastly, let’s have a look at the system in the Netherlands, which also has semi-open-list proportional representation:

In the Netherlands, the voter can give his vote to any candidate in a list (for example, in elections for the House of the Representatives); the vote for this candidate is called a “preference vote” (voorkeurstem in Dutch). If a candidate has at least 25% of the quota then he/she takes priority over the party’s other candidates who stand higher on the party list but received fewer preference votes. Most people vote for the top candidate, to indicate no special preference for any individual candidate, but support for the party in general. Sometimes, however, people want to express their support for a particular person. Many women, for example, vote for the first woman on the list. If a candidate gathers enough preference votes, then they get a seat in parliament, even if their position on the list would leave them without a seat. In the 2003 elections Hilbrand Nawijn, the former minister of migration and integration was elected into parliament for the Pim Fortuyn List by preference votes even though he was the last candidate on the list.

The mention of women voting preferentially voting for women puts list parity in NZ in perspective, I think.

The Netherlands has a low threshold of 0.67% effectively.

This threshold is one of the lowest for national parliaments in the world, and there are usually multiple parties winning seats with 2% or less of the vote. Any party that did not have seats in the House at the time of the election will have its deposit refunded if it receives more than 75% of the threshold (1/200th of the vote).

Currently, there are 13 parties represented in the Dutch House of Representatives (Tweede Kamer der Staten-Generaal or short de Tweede Kamer).

As in Denmark, the picture has remained quite unchanged historically.

To give an overview of the history of the House of Representatives, the figure [below] shows the seat distribution in the House from the first general elections after World War II (1946) to the current situation. The left-wing parties are towards the bottom, the Christian parties in the centre, with the right-wing parties towards the top. Occasionally, single-issue (or narrow-focus) parties have arisen, and these are shown at the extreme top. Vertical lines indicate general elections. Although these are generally held every four years, the resulting coalition governments do not always finish their term without a government crisis, which is often followed by fresh elections. Hence the frequent periods shorter than four years. How does New Zealand stack up?

We have a closed-party list system. In other words, it is completely up to the parties and their internal hierarchies to select their candidates according to their own party rules – there is no consistency between parties. Although the Electoral Commission recommended keeping the closed-party lists, I would favour a more open system giving voters more influence on the selection of candidates, be it directly (through preferential votes, for example) or indirectly (by influencing the party selection process, for example).

I think the NZ threshold of 5% is way too high and counter-intuitive to fair representation. Another problem with our MMP system is overhang seats, which the Commission has recommended abolishing. Other ‘perversions’ of MMP as it stands here in NZ are the so-called coat-tail rule and strategic voting, which can skew proportional representation and which are cynically gamed by political parties. 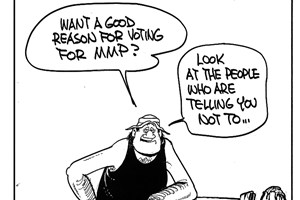 The number of electorate seats has been increasing steadily over the years thanks to the population growth centred in the North-Island. These seats include the seven Māori seats that all went to Labour in 2017.

I’d like to think that abolishing the Māori seats in a fairer proportional system like the one in the Netherlands should allow and enable Māori being better represented in Parliament. Only about half of all Māori are on the Māori roll and the proportional number is decreasing.

If I read the numbers correctly, there are almost half a million voters who register as Māori yet they are represented by only seven Māori seats without one dedicated (and committed) party. Under the current MMP system I cannot see how this could or would improve. 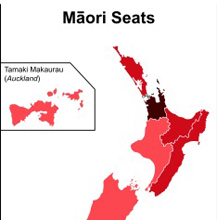 Another advantage of abolishing the electorate seats would be the requirement of having to review the boundaries every five years based on the Census. This can easily become another political football for parties to quibble about and used for political grandstanding.

It seems I am not alone here on The Standard in thinking that political parties present more of a hindrance than help 🙂 However, it is hard to see how 120 individual MPs could run an effective Parliament and Government without the support of a party and its apparatchiks. It would require a major overhaul of Parliamentary Services. It is also hard to see how candidates would mount an effective election campaign without party support unless they are so-called self-made millionaires and/or rely heavily on donations. Arguably, these are the least qualified candidates to represent us. Still, I think it would be good to debate and address the dominant influence of party politics on and over national (and local) politics.