‘
With the list of Bill English’s lies growing by the day (at least half-a-dozen last night alone) its not surprising the National Party’s attempts to fabricate an aura of trustworthiness is growing increasingly desperate. Its latest attempt, however, has failed spectacularly.

In July, National quietly set up a twitter account which is named – hahaha, get this – “Check The Facts”. Trouble is, National attempted to obscure its involvement. Its initial twitter bio stated . . . 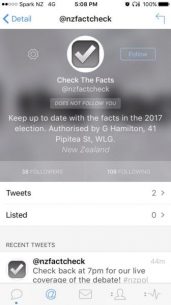 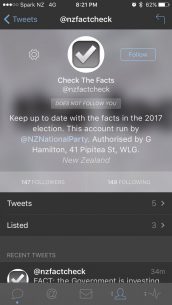 The lulz don’t stop there. Read through the various tweets and you’ll find “Check The Facts” has been well less than accurate in its portrayal of what constitutes a “fact”. There’s the usual National Party diddling about with figures, conflating “average” with “mean”, and the typical semantic hopskotch, plus a few beauty pearlers . . . 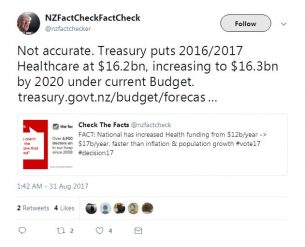 Fortunately, National isn’t just feeding the MSM chooks or talking to its band of myopic voters. Its actually attempting to tell its lies in real time on social media. Bad move. Just ask the UK Tories how attempting to fool the interwebz is working out for them. National’s attempted duplicity has blown up in its face and there’s now a twitter account dedicated to fact checking the so-called National Fact Checker.