National used to be better than this Back in the day National used to have a strong urban liberal wing.

John Key was responsible.  He realised that National’s traditional support base would not deliver power.  So he set out to broaden its appeal.

One of the early signs was when he had the National Caucus sign up to Sue Bradford’s anti smacking bill.  With a few transparent changes that meant nothing in reality he was responsible for getting the bill passed.  It persuaded ordinary Kiwis that Key could be trusted and had some liberal instincts.  We could have a progressive society and good economic management under his leadership.

Key was great with the visuals.  Early on he talked about an under class and the trip to Waitangi with Aroha Ireland before he became Prime Minister was a major PR event for him to show that at least superficially he cared about poor people.

The reality was different.  When he left over a quarter of a million of children were living in poverty and kids were living in cars even though their parents have jobs.  But perception was more important than reality.

Key was great at the pirouette and the change of the direction and the grabbing of opposition policy as well as the micro policy, the change that had little practical effect but which could be announced triumphantly as evidence that National was different.  The increase to benefits that National announced in 2016 was one of those policies.

He was also really good at reaching out to the gay and lesbian community.  He was a regular attendee at the big gay out and managed to engender something of a cult following. 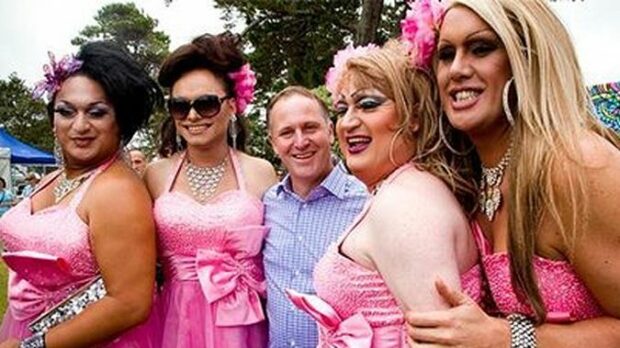 It did not go far, most of the gay and lesbian community continued to be Labour and Green supporters.  But it did give National some credence with urban liberals.

In this guest post by Tigger in 2011 skepticism was expressed about Key’s liberal credentials:

I know I’m supposed to admire the fact that a National party PM would take time out of his busy schedule to be seen with us homos (what a tolerant guy that nice Mr Key is!) but there’s something utterly dishonest about him appearing at the Big Gay Out.

History has a lot to do with this. Key leads a party that has rarely been our supporter and very often our oppressor. I still vividly remember the mid-1980s when the National Party and their supporters tried to kill homosexual law reform. Norm Jones, National MP for Invercargill, famously told us to ‘Go back into the sewers where you come from’.

And more recently in 2004 the Nats overwhelmingly voted against the civil union legislation. Some like Judith Collins conveniently claimed she would have voted yes if it had been gay marriage, the same logic that would see you denying bread to a starving person because it isn’t as good as caviar.

To be fair to our PM, his voting record does contain some gay positive ticks. He voted for both the Property (Relationships) Amendment Act and the obliteration of the provocation defence. But did the public register these as gay-related legislation? Or did Key’s polling tell him he could get away with these votes without drawing any fundamentalist fire?

Tigger was right.  National still remained very conservative on gay rights issues.  But at least they were pretending to be receptive.

Fast forward to yesterday and National blew all remaining urban liberal credibility out of the water.  They voted to oppose the introduction of the bill criminalising the use of the barbaric practice of gay conversion therapy.  Their reasoning was all over the place.

Simon Bridges kicked things off by saying this:

National supports the core intention of this thought. People should be free to be who they want to be and to love who they want to love. There is one major sticking point, however, which means that although we want to be supportive, we are opposing this law until it is amended. It is very clear in Kris Faafoi’s interview on Newstalk ZB with Heather du Plessis-Allan, and any plain reading of this bill, that good parenting will be criminalised … facing up to five years—it is exactly what it is saying—imprisonment for being parents to children under 18. The members opposite yell at me, but that is what Kris Faafoi said on Newstalk ZB, and it is wrong.

Parents should be allowed to be parents and to explore sexuality and gender with their children. But under this law, if a mum tells her 12-year-old son or daughter, “Taihoa, before you go on puberty blockers or other hormone treatment, wait till you’re 18”, that mum will be breaking the law. National believes there must be an exemption for parents.

Wow I thought, will the Bill really criminalise good parenting?

A reading of the bill suggests the proposition is ludicrous.

Section 9, breach of which has a penalty of up to five years imprisonment states:

So to qualify for five years in the clink a parent would have to cause serious harm to their child by imposing the practice AND they had to either know that the practice would cause serious harm OR they were reckless about if harm would occur.  And the Attorney General’s approval for the prosecution has to be given.  There are a whole lot of caveats and requirements before prison becomes an option.

There is a further offence under section 8 which has a maximum penalty of three years imprisonment of performing conversion therapy on a person under the age of 18.  The definition of “Conversion Practice” will need some work as what is a practice is not initially clear.  It should require something more than a conversation between a parent and a child and would not on the face of it be captured by a parent making a decision as to medical treatment.

Bridges finished by saying this:

I intend on writing to Kris Faafoi shortly. Given the good intention of this bill, National wants to work with him so that we can support it. But, regrettably, we cannot, in good conscience, while it criminalises parents for being parents, while it intervenes in families with the criminal law over conversations and decisions about medical treatment that should be for them. We are opposing this bill until Kris Faafoi does the right thing.

The language in the bill in parts is not clear and needs to be reviewed further.  That is what select committees are for.  If National wanted to work with the Government it would have agreed to the bill going to select committee.  Then any problems could be identified and addressed.

The liberal wing of the party were performing triple backward summersaults in trying to claim that their stand was a principled stand and that in opposing it, rather than sending it to select committee Parliament could improve the bill.  We should have included them into the country’s Olympic team.  With this amount of dexterity they would have been medal contenders.

It is clear that the broad electoral coalition that John Key built up and which sustained National for three terms in Government is in tatters.  David Seymour and ACT must be grinning from ear to ear.

59 comments on “National used to be better than this ”