Nats in a world of their own

National’s new online ad campaign shows a roadworker with a stop sign, supposedly representing Labour (he has a red hat and red swandry so you get the point) and another roadworker with a go sign meant to represent National (although his sign is green … searching for a support partner?). It’s pretty bare-faced cheek from the party with the worst economic record in this country’s history. 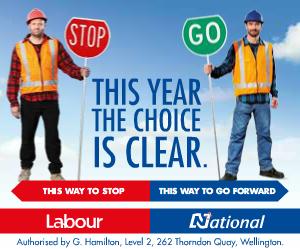 It’s not just this time that National has the poorer economic record. National gets beaten by Labour hands d0wn since the two modern major parties emerged: That 1800% increase is the fastest increase in government debt since – no, not World War 2 like you would expect, and not the Depression either but since the New Zealand Wars.

If I was Labour, I would be rubbing my hands in delight that National is trying to have a fight over the economy. It’s where Labour can win against Double Downgrade and Double Dipton, and it suggests National’s polling shows that the last few weeks of cock-ups mean National knows can’t win by smiling, waving, and three-way handshakes alone.