When you look at the steady rise in building consents in Auckland, it just highlights exactly how incompetent National were and would still be as managers of the economy. From Greater Auckland’s Matt L in “Auckland Building Activity soars” you can see the build up in consents (click on the image for a larger view). 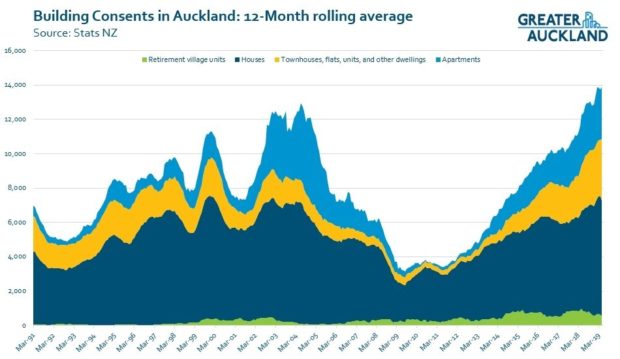 Now of course gaining consents aren’t buildings actually getting built. A lot depends on the finance, take up of the housing prior to and during building, and these days just the cost and availability of materials and people. But getting a consent isn’t a easy or cheap procedure and it damn well shouldn’t be1. But because of the lead times, you need to have consents going in well before the builds. And that looks like it is finally happening.

Moreover the types of housing is getting better suited to modern Auckland. Probably because there is less uncertainty for developers about what the city wants to build.

What’s also notable is that much of the increase has come about since the Unitary Plan was passed in August 2016 and that more than half of all new consents are for denser housing typologies such as townhouses and apartments. The townhouse category is seeing perhaps the most significant difference compared to what we’ve seen before with nearly 3,600 consents issued over the 12-months period which is more than 50% higher than any time prior to the Unitary Plan being adopted.

The housing sizes are coming down. Fewer MacMansions built out at the end of the creaking transport infrastructure and more apartments and townhouses mostly around the available public transport corridors. This is pretty clear when you look at the snapshot that Matt did of where consents were issued for April.

So where does National fit into this? Well after a rule of law, clean water and sanitation – housing and transport are the economic marks of a productive society. They clearly failed at the those last two (and weren’t particularly good on  the others).

National’s policy settings essentially were to pile people into Auckland over the past decade at an ever increasing rate… Far in excess of creating the transport infrastructure and housing required to maintain that rate of migration.

The year ending June 2017 being pretty typical of the last decade. Auckland grew by 1.79% from immigration and 0.86% from natural increase. Sustaining population  growth of 2.5% increase on a dense population areas containing 1.5 million is whole different ball game to doing it for somewhere like Northland with its population of a tenth of the size and similar growth. There is less room for error.

National just before launching their immigration drive into Auckland, at the urging of the economic idiots from Act, kneecapped the councils in 2010 by ignoring the royal commission advice and forcing the formation of the Super City.

A significiant effect of this, on top of a global financial crisis, was to  increase developer uncertainty and to effectively stall most housing development in Auckland. Which is a significant cause of the low number of housing consents after 2009.

So National effectively took the profit generated from increased windfall immigration to Auckland and put it into providing Roads of Significance to National (RoNS) in the areas with lower population and slower growth. It meant that Auckland didn’t get the kinds of fast fixes that would have eased roading glitches. For instance the horrible SH1 Greenlane stop spot, where every day the city grinds to a stop on. Or the incredibly protracted fixes on widening the southern motorway from 2015 and still going.

Auckland’s transport infrastructure grew significiantly slower that it should have. In fact the only reason that I can see for any new transport spending in Auckland over the last decade was primarily because Auckland politicians spent a lot of time butt kicking National’s politicians.

Those annoying Auckland politicians managed to force National recalcitrant economic idiots like Simon Bridges in his transport roles into finishing the double tracking and electrification of rail and getting the City Rail Link underway to be able to use the rail effectively. And essentially forced the existing projects left over from Labour to be done – like the Waterview tunnel.

Meanwhile housing was being produced at best at about a third of the required rate for the population growth, prices were rising rapidly, and National were saying that the Labour politicians like Phil Twyford were being alarmist.

Now of course, we have Simon Bridges and other morons from National claiming that Phil Twyford and Labour aren’t cleaning up National’s wasted decade fast enough….

Looking at those consents, it is pretty hard to see how it could be done much faster with any due diligence 1.