This is the latest example. 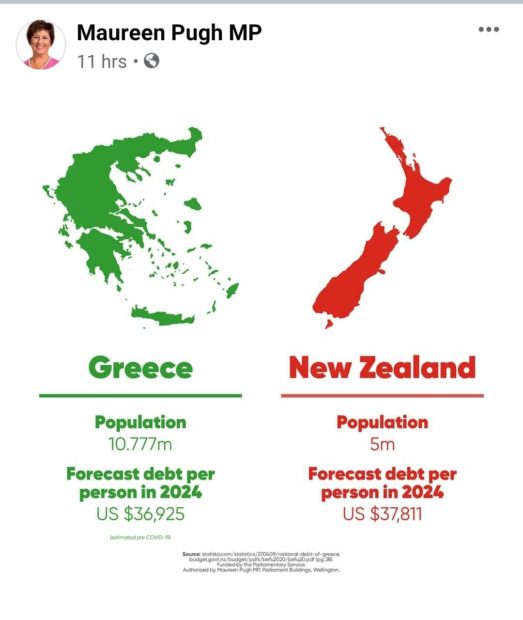 The Greek information is based on data released in November 2019.  The page has this rider:

Due to the high level of uncertainty in current global economic conditions, the IMF does not offer projections for this economic indicator at this time. Data will be updated as soon as they are available.

Clearly the estimate is pre Covid and assumes business as usual.

The New Zealand figure is taken from the Budget documents and is a projection of the post Covid spend necessitated to keep the economy going.

To show the difference you just have to look at the current figures.  The latest figures I can find for Greece suggests that its debt is currently $38,141 per head of population and New Zealand’s is $7,515.  Greece’s predicted figure is clearly predicated on a slight pay down of debt or an increase in population or a combination of both.

The suggestion that New Zealand will be doing worse than debt burdened Greece presumes that Covid 19 will have no effect on Greece’s economy and the Greek government will not be doing anything.  This premise is clearly false.

You would hope that National had learned from previous advertisements being ruled misleading.  There was recently a third decision given by the Broadcasting Standards Authority ruling against the accuracy of its advertising.

I covered the first two strikes in this post from last year.

Strike one was when it claimed that cars will be up to $6,000 more expensive when the reality was the maximum fee was $3,000 and this would only be paid in very few cases.

Strike two was claiming that the Regional Growth Fund was receiving 75 times more funding than the Pharmac increase.  The majority of the board thought the comparison, which involved comparing a four year spend with a a one year spend, was misleading.

Its third strike is this decision of the Advertising Standards Authority where it was held that claims that National had created 10,000 jobs a month with the implication that this was during its term in government was misleading.

The offending advertisement was divided into red and blue boxes.  The red box claimed that there were “1,000 more on the dole every month under Labour”, with source information in fine print. The blue box says, “Nearly 10,000 more jobs every month under National”. The first thing to notice is different data is being compared.  Under Labour unemployment, until recently, had tracked down.  From October 2017 to March 2020 (30 months) there were a hundred thousand more kiwis employed in jobs.  This is 3,300 per month.  Instead of that National used the figure for people going on the dole.  In a country with a growing population using absolute figures can be deceiving.

What was really dishonest was National’s suggestion that it had created more than 10,000 jobs every month during its reign.

It did, but as shown by the small print only during the period from quarter 3 2015 to quarter 3 2017.  The population actually grew by 185,000 at that time so an increase in jobs was inevitable.

The most egregious feature of this is that the figure is so cherry picked.  The ad should have said “[n]early 10,000 more jobs every month under National for a two year period of its 9 years in power” but this would have lost all of its effect.

I suspect someone will take the latest advertisement to the ASA.  But I really hope that we do not have an election campaign where National produces clearly misleading advertisements just to churn up controversy and clicks.  There has to be a better way.