FiLia 2021 is a grass roots conference run by volunteer women, the largest feminist conference in Europe, and is running this weekend in Portsmouth in the UK. One thousand women attended. The conference covers,

The conference is being protested by gender identity activists. I’ll preface what I’m about to say by stating that obviously trans people deserve the same human rights as other people, including attention to their specific needs as trans. And I’m sorry for the trans people getting caught up in this war who just want to get on with their lives, they don’t deserve to be associated with this. Which is why I being clear that I am talking about Gender Identity Activists (GIAs), not trans people. Some feminists use the term Trans Rights Activists (TRAs) instead, and there are political reasons why they do that.

Regarding the rest of this post, I do feel like telling someone to come and get their people, I’m just not sure who I should direct that too, perhaps left wing, trans ally men.

Every single time feminists gather to discuss their rights, men show up to order them to give them blow jobs. Every time.

Violent misogynists like this are exactly why we still have to discuss our rights in 2021.

There’s a vigil outside the conference for women who have been murdered by men. Bear in mind that this is a topic in the UK getting a lot of discussion at the moment because of recent sexual assaults and murders of women, including by a policeman.

We are outside at the #FiLiA2021 #Femicide vigil to remember the women taken by #maleviolence – women are holding our space! #WomenUnitedWillNeverBeDefeated #sisterhood and #solidarity 💜💚✊🏻✊🏾✊🏼✊🏿 @FiLiA_charity @portsmouthtoday pic.twitter.com/3H62YVWjnn

Inside the conference women spoke about rape as a weapon.

Outside, GIAs chanted and displayed their true colours, 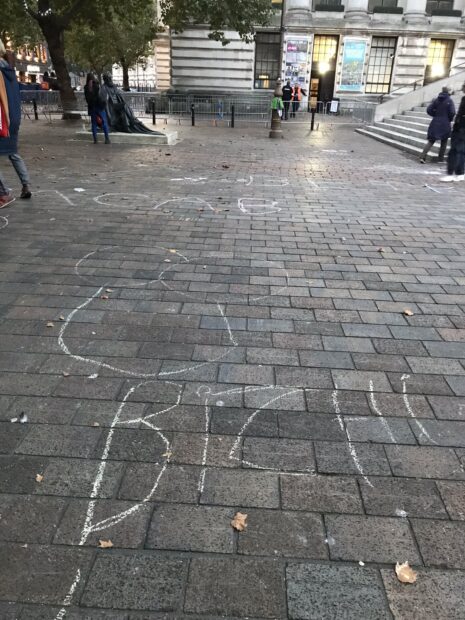 In case you think this is a one off or an outlier, please bookmark this website, terf is a slur, and refer to it each time women talk about the violence they are subjected to online when they talk about women’s sex-based rights.

(If you don’t know what TERF means yet, it’s an acronym coined by a trans ally feminist, originally used politically  to describe radfems who wanted women only spaces  (trans exclusionary radical feminist), and is now almost wholly used as a term of abuse directed at women.)

The images in this post are not uncommon, they’re routine.

Because it’s apparently not self-evident, I’ll let feminists spell it out.

If you’re “protesting” a feminist conference by telling women to suck your dick, you’re not standing up for the oppressed. You are the oppressor. Reducing women to sex objects in order to degrade and silence us is pure misogyny. #FiLiA2021

Julie Bindel, long time campaigner on ending male violence against women, and speaker at the conference, wrote today in The Misogyny of Trans Activists,

A big focus is the campaign to end rape, domestic abuse, commercial sexual exploitation, and femicide, the killing of women and girls by men because they are women and girls.

As I approach the Guildhall where the conference is taking place I hear the now only-too familiar chants by trans activists: “Trans women are women!”, “No TERFS on Pompey”. One sign reads: “Imagine calling yourself a feminist while trying to dismantle the rights of a marginalised group of women and girls.”

The protesters are talking about a subset of men and boys who identify as transgender. During my session on the themes in my book on feminism, trans activists positioned themselves directly outside the windows, and attempted to drown out my words with “Blow jobs are real jobs” (they also object to any critique of the sex trade). Amnesty, whose work is supposed to empower and protect people, was also sponsoring these aggressively anti-female protests, as could be seen from the placards plastered with their logo.

Bindel speaking to the protestors outside the conference,

A feminist journalist I know came along to join in the conversation, suggesting that the signs being held up by some of their comrades telling the conference attendees to “Suck my dick you transphobic cunts” was not acceptable, and certainly not suggestive of an oppressed group protesting their oppressor. It looked rather more like plain old-fashioned misogyny. They said something along the lines of, “that’s how young people talk these days”. I told them that the last time I was attacked by a man (he punched me in the face when I told him to “sod off”) the last words I heard before being knocked out cold was “Suck my dick you cunt”.

As with online abuse, there's an issue with anti-feminist protests that the media doesn't want to report the actual words used (because of the concept of a "family newspaper"). But this was #FiLiA2021 today. Is this meant to persuade, or just intimidate? pic.twitter.com/h3WiT6fhGf

You could hear these protesters chanting while the most incredible woman was telling a packed room about the #TigrayGenocide. The contrast felt both shocking and meaningful. #FiLiA2021 https://t.co/dj0ZGmZOOm

“The #FiLiA2021 conference: a gathering for puppets of the patriarchy to roll back the Equality Act. So men don’t have to”

AND TO PROVE IT HERES A BIG DICK!!!

It’s by no means the only reason, but this in itself is a big part of why so many women are saying no to the removal of female-only spaces. We have a right to our own politics and to not be subjected to sexualised violent imagery and rhetoric. And we have the right to determine where our boundaries are.

There’s no good reason I can see that women and trans women can’t be allies, each having their own politics, spaces and class-specific rights. But as Bindel’s piece demonstrates, one side is willing to work with the other, and the other is intent on something else entirely. If you’re on that side and still consider yourself progressive, come and get your people.

140 comments on “New misogyny same as the old misogyny ”