Israel has launched numerous air and missile strikes into Syria since the beginnings of the attempted overthrow of the Syrian government. Each time it has happened, Russia has been “given the nod”. And just as with Turkey moving it’s military against the Autonomous Regions of Rojava, Russia has stepped back and let it happen. Which makes sense.

Whatever your thoughts on it may be, Russia are in Syria on a legitimate basis according to international law. They know damned fine well, that if they play their cards right, they will exert a major and on-going influence through-out the region, and they will be somewhat inoculated against any Saudi inspired wahhabism . Part of having a successful presence is the ability to get on with any awkward neighbours (Israel and Turkey).

Iraq, Iran and Syria are on the one page.

Turkey and Israel are on another.

So Russia, for the simple sake of manageability and long term relationships, will allow Turkey to encroach on Syrian territory in the short term. They don’t care about the motives of Turkey, or the rights and wrongs of “Operation Olive Branch”. Neither do they care about Israel looking to thwart any on-going Iranian presence in Syria.

What Russia cares about is its own security, it’s naval base on the Mediterranean, and those future relationships that are required to exercise a meaningful sway in region. 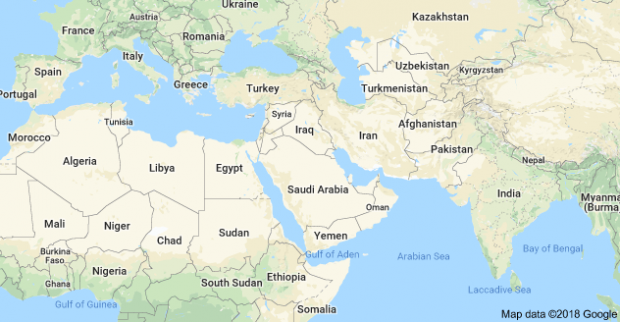 They will stand (kind of quite literally) between Iran and Israel. There will be probably be some arrangement reached between Israel and Russia, whereby Russia takes on a measure of responsibility for limiting any Iranian presence in Syria. When all the dust has settled, neither Russia nor Syria will have any need for an Iranian military presence in Syria anyway. And they (Russia) will play nice with Iran in any process of gently leveraging them out or dampening any ambition any factional power base in Iran may have for building what Israel refers to as the “land bridge” between Iran and Lebanon.

There will probably also be an agreement between Russia and Turkey that will mollify Turkey’s obsession with all things Kurdish. That’s going to spell the end for Rojava one way or another.

Meanwhile, the US and the few European countries who have unlawful military presences in the region will, with much huffing and puffing, withdraw.

The Wahhabism  that has come out of Saudi Arabia will be contained behind a useful, if incomplete buffer zone comprising Iran, Iraq and Syria. (Pakistan and Afghanistan could still act as conduits for exporting Wahhabism to the Russian Republics, but at least the Arabian Sea sits between Saudi Arabia and Pakistan).  Turkey’s erstwhile facilitation of Jihadist incursions into Syria will be a major card in any future Russia/Turkey/Syria negotiations around dealing with any alleged PKK terrorist presence in Syria.

In short then, the US has blown it in terms of much of its Middle East influence. Israel may well find Russia’s immediate presence to be more to its advantage than the US’s “long arm”. Things will calm down.

And of course, lots of Chinese development money will flow into the region to finance the rebuilding of Syria and probably Iraq too. (As of February this year, the US had pledged precisely zero dollars in aid for Iraqi reconstruction)

And the bottom line is this. Even if everything else in this post transpires to be way off beam, this much I know for sure – not a single ordinary person anywhere in the Middle East will cause so much as a passing second thought to be elicited from any of the game playing bastards.