It’s been a while since I’ve written a blog post, almost a three-year break.  But I’m finally in a position to start writing again, so let’s see how this goes.

I found this twitter thread by Hossam really resonating with me:

“Overpopulation” is one of the most prominent thinly veiled racist (and Capitalist) myths that is accepted by both Conservatives and Liberals alike as some sort of obvious self affirming fact. It’s a bunch of Westerners unable to accept that their over indulgence is destructive.

Who are the people always said to be overpopulating? Now compare that to who the people hoarding all of the resources and causing the biggest issues when it comes to the environment, ecological health, over-consumption/waste of water and food, AND excess breeding of farm animals.

Is the issue the number of people on the planet surpassing the resources available? Or is it that the resources are entirely hoarded by a small percentage of the world population that happens to also be utilizing those resources in tandem with the most inhumane, spiritually deficient, and hedonistic lifestyle/philosophy as a result of modernity? Who are the ones most polluting the planet? The people in Bangladesh who are often a target of slanders of overpopulation or the US and its European morally defunct allies?

I want to add that this lifestyle spearheaded by modernity is of the most destructive in human history. It is literally killing the planet, no other group of people in history can be blamed for causing the destruction of the Earth more than us. NO ONE.

Yet the ones spearheading this destruction have the gall to look back at our predecessors and shame them as being backwards and barbaric, while also lambasting those ppl suffering the consequences of the lack of resources the most and living the most simply as being responsible.

Ppl don’t truly understand how disgusting the Overpopulation Myth is, and how immensely racist and emblematic of the same mentality that produced eugenics and results in genocides it is. People who claim to hate genocide and eugenics push this myth with no sense of irony.

Whenever I’ve thought about the topic of overpopulation, my first though is that we need to first address the distribution issue. There is enough food in the world to feed everyone – we produce enough now. The problem is that it’s not fairly distributed. If people are dying in hunger, it’s because of the human-designed systems which ensure that some have too much and others not enough.  I know many of us are trying in various ways to raise awareness, to push for change to such systems, but ultimately until we can convince enough people to make the necessary changes, those deaths will keep happening.  As long as it continues to be someone else’s problem or the fault of those who suffer, change will not happen.

Some of the comments to the thread have useful information, such as: 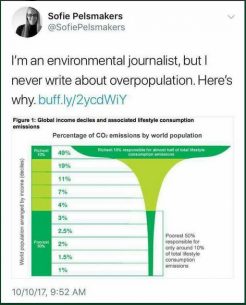 The solution is to look at patterns of consumption instead of population, and to put the responsibility squarely on those who have been over-consuming.  Continued pushes for culture change around consumption and consumerism are more urgent than trying to stop poor, brown people from having babies.