I am spending some time down in Taranaki and thought I would check out some of the local historical sites.

I was generally aware of its history but after reading some more about it I cannot believe how badly local iwi were treated, and how this particular treaty settlement was, out of a crowded field, so just.

A starting point is the Treaty of Wairangi, especially article 2 which said:

The Queen of England agrees and consents (to Give) to the Chiefs, hapus, and all the people of New Zealand, the full chieftainship (rangatiratanga) of their lands, their villages and all their possessions (taonga: everything that is held precious) but the Chiefs give to the Queen the purchasing of those pieces of land which the owner is willing to sell, subject to the arranging of payment which will be agreed to by them and the purchaser who will be appointed by the Queen for the purpose of buying for her.

This did not last long.  The land wars, essentially a grab of land by the authorities and pakeha immigrants erupted.  One of the causes, the Waitara purchase, caused fighting to break out in Taranaki.

The New Zealand History website has this description of how it started:

A minor chief, Te Teira Mānuka, had offered to sell Governor Thomas Gore Browne land in 1859. Te Rangitāke (also known as Wiremu Kīngi) denied the validity of the sale and his supporters erected a flagstaff to mark their boundary.

This sort of event, sale of land by an individual clearly without tribal authority that the European authorities then insisted on enforcing, happened time and time again during our country’s history.

The actutal chief, Wiremu Kingi had previously tried the polite response and wrote to Governor Thomas Gore Browne.  In legal terms Browne was being put on notice: 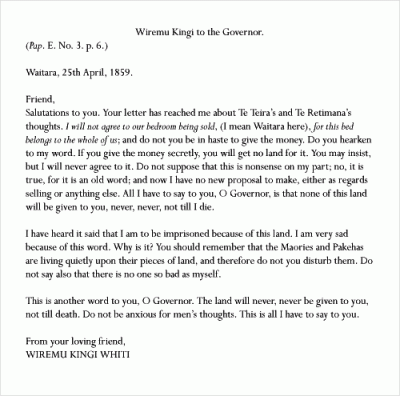 Browne did not take the hint.

The fighting itself ended more in a stalemate than a victory for the settlers with Kingi and his supporters proving to be adept at the use of fortifications protecting them against the overwhelming firepower the authorities utilised.

The settler dominated Parliament then chose to pass the New Zealand Settlements Act 1863 which allowed the confiscation (raupatu) of land owned by any tribes deemed to be in open rebellion with the Crown.  All of Taranaki was deemed to be in open rebellion, ergo they all lost their land.  Clearly as far as the settlers were concerned the opposition to clearly unenforceable contracts for the sale of land was tantamount to rebellion.  And while for the purposes of land sales individual Maori had the right to do what they wanted when it came time to land confiscation under the Act all Maori were collectively responsible for the actions of a few.

The Taranaki Iwi website has this description of the confiscation process:

The New Zealand Settlements Act of 1863 provided for the confiscation of Maori land when the Crown determined an iwi, or a significant number of members of an iwi, had been in rebellion against the Queen.

On 31 January 1865 “Middle Taranaki” was declared a confiscation district. The area commenced at the Waitara River mouth and extended to the Waimate Stream in the south, within which eligible sites were to be taken for military settlement. Oākura and Waitara South were then declared as “eligible sites for settlement for colonisation” being specific areas within the wider ‘Middle Taranaki’ district. In September of that year two other districts were declared, Ngatiawa and Ngatiruanui. The Ngati Ruanui and Middle Taranaki districts included the entire Taranaki Iwi rohe and the Crown assumed ownership of all the land within that district.

A Compensation Court set up under the New Zealand Settlements Act was intended to return land to some of those affected by the confiscations, principally those who were deemed not in rebellion against the Crown. Every member of Taranaki Iwi who sought the return of their land was required to do so through the Compensation Court. Those deemed rebels could not make claims.

In 1866, the Court made 147 awards totalling 20,400 acres for the whole of the Taranaki area. The awards were made via land scrip and promissory pieces of paper to individuals (and mostly settled out of court) rather than iwi, the customary way in which we had held title to our lands.

Against this background Te Whiti and Tohu decided to set up a new community at Parihaka.  It was pan tribal and at its peak 2,500 people lived there.  They also decided on the unusual but logically compelling tactic of engaging in completely peaceful opposition to attempts to take from them their whenua.  Surely if they did not fight the European settlers they could not be deemed to be in rebellion against the Crown?

Unfortunately not.  The greed for land clearly usurped considerations such as the rule of law and the provisions of the Treaty.

The actions taken by local iwi would have made Mahatma Ghandi proud.  The treaty settlement summary has this description of the steps they took:

In May 1879, followers of Te Whiti and Tohu began to plough land across Taranaki, as an assertion of their rights to the land. By the end of July, 182 ploughmen had been arrested. Only 46 received a trial, but all were detained in harsh conditions in South Island prisons for at least 14 months, and some for two years. In June 1880, Crown forces began to construct a road through cultivations near Parihaka. Between July and September 1880, 223 more Māori were arrested for placing fences across the road in an attempt to protect the cultivations. Only 59 fencers received a trial, but again all were sent to South Island prisons. Over this period, the Crown promoted and passed legislation to enable the continuing detention of those prisoners who had not been tried.

In July 1881, people from Parihaka and surrounding Taranaki Iwi settlements erected fences around traditional cultivation sites which the Crown had sold to settlers. On 5 November 1881, more than 1500 Crown troops, led by the Native Minister, invaded Parihaka and then dismantled the settlement and forcibly removed many of its inhabitants. Te Whiti and Tohu were arrested and held without trial for 16 months.

For their efforts Te Whiti and Tohu were put on trial but something unusual happened.  They struck a fair Judge.  Dick Scott in his book on Parihaka describes what happened:

After six months behind bars Titokowaru came before Judge Gillies in the supreme court, New Plymouth. The judge dropped a bombshell. Questioning the legality of the whole Parihaka expedition, he declared no cabinet minister could personally conduct such a campaign ‘of his own mere will’; he must act under formal and official authority. If the jury found Bryce and Hursthouse had not been properly authorised to disperse people who ‘merely sat still’, their duty was to bring in a no bill.

The grand jury found true bills and the newspapers headed an attack on the judge for his remarks. But Gillies, a judge of unusual character, had a record of independent rulings. On 8 May when the case came for trial, Whitaker, the new Prime Minister (Hall had retired with a knighthood), ordered the crown prosecutor to drop the prosecution. After men had been imprisoned on grave charges for a long time it was ‘a very extraordinary proceeding,’ Judge Gillies commented, ‘more especially when I see that two of the indictments have been quashed on account of insufficiency in the face of them.’ Addressing the dock he said: ‘The government has determined not to bring you to be tried on this charge. You have already been in prison six months waiting for trial. Nor does the government offer any evidence. You are therefore free to go where you will.’

The Government responded by passing the most extreme, obscene overreach of law I have ever seen.  The effect was to allow the continued detention of Te Whiti and Tohu without trial and to protect those who had clearly acted illegally in arresting and detaining them. As for the promise to reserve some land as reservations this was also broken.  Again from the Treaty Settlement summary:

In 1881, the West Coast Commission found that the Crown had failed to fulfill promises about Māori reserves, and recommended that some reserves be granted. However, reserves were not returned to Māori outright, but were placed under the administration of the Public Trustee, who then sold or leased in perpetuity large areas to European farmers. Through the 20th century, a number of legislative acts further undermined the ability of Taranaki Iwi people to retain or control their remaining lands. Today, less than 5 percent of the reserved lands are in Māori freehold ownership, and approximately 50,000 acres remain leased in perpetuity. The massive loss of land has limited the ability of Taranaki Iwi to participate in society on equal terms with many other New Zealanders.

Recently the Crown has been seeking to repair the damage and make amends for what occurred.  The Taranaki Iwi Deed of settlement summary contained this apology:

The deed of settlement contains acknowledgements that historical Crown actions or omissions caused prejudice to Taranaki Iwi or breached the Treaty of Waitangi and its principles.

The deed of settlement also includes a Crown apology to Taranaki Iwi for its acts and omissions which breached the Crown’s obligations under the Treaty of Waitangi and for the damage that those actions caused to Taranaki Iwi. These include the Crown’s actions that led to the outbreak of war in Taranaki, the indiscriminate, unjust and unconscionable confiscation of the land that had supported Taranaki Iwi for centuries, and its invasion of Parihaka and systematic dismantling of the community.

Financial redress totalling $74 million were made.  Ignoring the social and economic loss suffered by local iwi the payment represents $3,600 per acre of land which the authorities had promised to return.  This is absolute peanuts.

Parihaka had its own special piece of legislation,  Te Ture Haeata ki Parihaka 2019.  At the introduction of the Bill Kelvin Davis said this:

This bill is the result of a long journey. In 2014, Taranaki iwi, Parihaka, and the Crown agreed to establish a working group aptly named Kawe Tutaki, which means “a vehicle towards closure”. Kawe Tutaki advised Ministers on how the Crown could best support the Parihaka community outside the Treaty settlement process. After careful consultation with the Parihaka community, Ministers, Crown agencies, and local authorities, Kawe Tutaki recommended the Crown reconcile its troubled relationship with Parihaka and recognise the community’s important legacy, and assist Parihaka to again become a vibrant and sustainable community founded on principles established by its visionary leaders Tohu Kākahi and Te Whiti o Rongomai.

A compact of trust was signed on 22 May 2016 as a first step to rebuild the relationship. In November that year, the Crown proposed a reconciliation package that included formal relationship agreements with Government agencies and local bodies, a financial contribution towards Parihaka’s future development, a Parihaka-Crown relationship forum, and a formal apology from the Crown. The Parihaka Papakāinga Trust then led an innovative consultation process with the community to decide whether the package was acceptable.

Reading through the documents I am struck by a few things, how egregious Taranaki Iwi were treated, how their rights were trampled on, how possibly the first attempt at a non violent response to tyranny was met with further tyranny, and how the treaty settlement is but a very modest compensation package for what local iwi has suffered.