Max Rasbrooke has done an analysis of donations to political parties. Henry Cooke wrote it up on Stuff complete with some pretty graphs:

Over half of major political cash comes from donations of over $15,000

Over half of major political donations come from wealthy individuals able to splash out $15,000 or more, new research shows.

The breakdown by party is interesting:

National is overwhelmingly the largest recipient of donations, raising $11.7m over the six years between 2011 and 2016, almost three times Labour’s $3.9m. But just 22 percent of their funds come from donations of over $15,000. 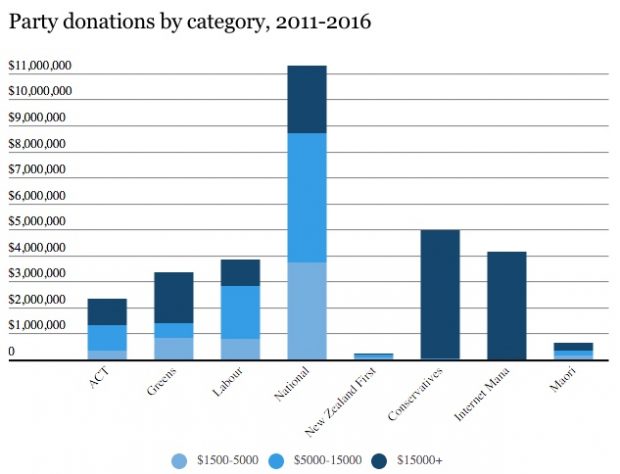 (In the Stuff original you can mouse-over the bars to get underlying figures.)

The funding bins are determined by the way the Electoral Commission collects its figures. This process misses donations under $1,500 so its an incomplete picture. Labour and The Greens get much of their funding from numerous small donations.

Obviously National have a huge fundraising advantage, and although that alone is not sufficient, other things being equal it translates into an advertising / strategic advantage.

Large donations are not necessary for success and certainly do not guarantee it.

Rashbrooke is concerned that donations buy influence. It’s pretty hard to argue that this can never be the case, and the ability of the rich to have more control over the political process is profoundly undemocratic. Rashbrook doesn’t say it but I will, private donations over $100 should be banned, and political parties should be state funded. It’s worth the cost for a transparent process where our politicians are not beholden to to donors.

Lots of strange assumptions in this piece. Average Labour Party donation is around $30. Makes up a significant chunk of campaign funding. https://t.co/xAmuKRxioX