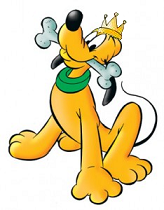 In Michael Moore’s Capitalism: A Love Story (which is excellent, btw) he refers to two 2005 Citigroup memos about â€˜plutonomy’ economies and political structures designed with the primary purpose of further enriching the rich. They’re stunning, not only for their frank admission that capitalism favours a tiny portion of the population at the expense of the rest but the premise that this is fantastic and that anything that could change the situation, like democracy, is a â€˜threat’. Here’s some quotes:

The earth is being held up by muscular arms of its entrepreneur-plutocrats [Jesus, a straight-faced reference to Ayn Rand’s Atlas Shrugged]

In a plutonomy, there is no such animal as the â€˜average consumer’. There are rich consumers, few in number, but disproportionate in the gigantic slice of income and consumption they take. There are the rest, the ‘non-rich’, the multitudinous many, but only accounting for surprisingly small bites of the national pie.

The top 1% of households account for 33% of net worth, greater than the bottom 90% put together.

[During an economic boom] in a plutonomy, the rich drop their savings rate, consume a larger fraction of their bloated, very large share of the economy. This behaviour overshadows the decisions of everybody else. The behaviour of the exceptionally rich drives the national numbers the ‘appalling low’ overall savings rate, the ‘overextended consumer’, and the ‘unsustainable’ current accounts.

While damning â€˜non-plutonomies’ the memos show that it is possible to be a wealthy country with a basically capitalist system without an ever higher share of wealth going to the ultra-rich: 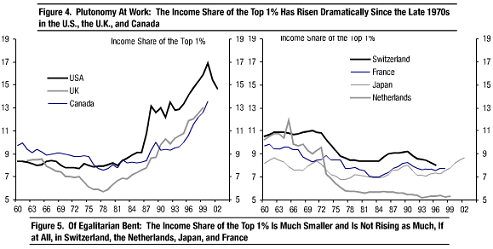 Under a section dealing with â€˜threats’ to plutonomy:

Whilst the rich are getting a greater share of the wealth and the poor a lesser share, political enfranchisement remains as it was one person, one vote. At some point it is likely that labour will fight against the rising profit share of the rich.

Corporate tax rates could rise, choking off returns to the private sector, and personal taxation rates could rise dividend, capital-gains, and inheritance tax rises would hurt the plutonomy.

slow down the rate of wealth accumulation by the rich generally thought a reduction in the profit share of GDP. This could occur through a change in rules that affect the balance of power between labour and capital.

One reason that societies allow plutonomy is because enough of the electorate believe they have a chance of becoming a Pluto-participant. Could plutonomies die because the dream is dead, because enough of society does not believe they can participate? The answer is of course yes. But we suspect this is a threat more clearly felt during recession and periods of falling wealth if voters fells they cannot participate they are more likely to divide up the wealth pie.

The rich know they’re on conflict with us and they’re outnumbered. Their best hope is that most of us keep our eyes closed and continue to buy the lie that we could be plutocrats too.