Written By: mickysavage - Date published: 10:30 am, May 2nd, 2018 - 209 comments
Categories: democracy under attack, Dirty Politics, Media, the praiseworthy and the pitiful, you couldn't make this shit up - Tags: nicky hagar, russell brown 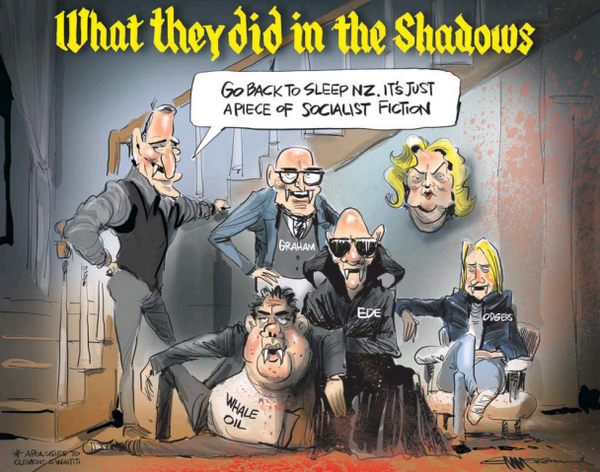 In a really unusual move the police have emphatically dealt to rumours that have been circulating about Clarke Gayford.

Jacinda Ardern’s partner Clarke Gayford has been under an unprecedented assault of baseless rumour and false innuendo with the apparent intent of dragging down the Prime Minister.

For the past seven months, Gayford has been the subject – on social media and via word of mouth – of untrue allegations and accusations.

The sheer scale and nature of the claims have led to Police Commissioner Mike Bush taking the extraordinary step of signing off a media release that rejects the speculation.

The Police National Headquarters statement said: “While in general we do not respond to enquiries which seek to confirm if individuals are under police investigation, on this occasion we can say that Mr Gayford is not and has not been the subject of any police inquiry, nor has he been charged in relation to any matter.”

And guess where the rumours have been coming from?

Media commentator and Public Address blogger Russell Brown said the comments appeared to be driven by a “troll pack” of users who were pushing the false rumour on the social media platform.

Dirty Politics author Nicky Hager said when contacted that there were people who used social media to leverage gossip and rumour to gain political advantage.

“They are trying to gain partisan advantage through damaging the Prime Minister by a campaign of innuendo.”

Hager said the aim was to steer the public’s political focus away from policy to personal issues which didn’t even need to be true.

“They are trying to find personal or moral things — true or untrue — to smear and marginalise the political figures. It’s never playing with a straight bat, never considering issues.

National is distancing itself from the rumours.  The attack on someone outside of politics to try and harm a politician is despicable and brings back strong memories of dirty politics.